After an upsurge in strike action last month, generated in part by transport workers’ dissatisfaction over the cost of fuel, the focus of labour activism returned to the factory floor in April, particularly in those factories that were planning to downsize or relocate.

China Labour Bulletin recorded a total of 30 strikes in April, down eight from a month ago. Strikes in the manufacturing sector however rose 17 percent from March to 20 cases in April, mainly triggered by workers’ demands for pay increases (12 cases). In addition, factory mergers or relocation plans triggered seven strikes, with workers protesting inadequate redundancy packages. 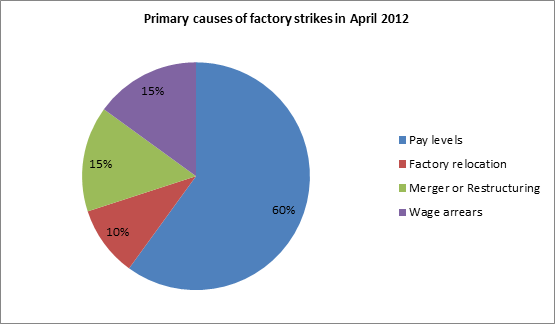 Twelve of the protests reportedly led to some kind of collective bargaining or negotiation process, and three were successful in the sense that workers and management ended up on relatively good terms. The police meanwhile were reportedly called in to deal with disputes on nine occasions.

The majority of strikes recorded in April were concentrated in Guangdong and the Yangtze River Delta region, very accurately reflecting the Migrant Worker Happiness Index compiled last month by the People’s University of China, which showed that workers in Shenzhen, Dongguan and Shanghai were the least happy of the workers interviewed in the 20 major cities.

There were a smaller number of strikes in inland provinces including two at Foxconn plants in Shanxi and Wuhan. In the Shanxi provincial capital of Taiyuan, more than 2,000 Foxconn workers went on strike on 13 April protesting unfair remuneration, leading to a heavy police intervention. And on 25 April, hundreds of workers at Foxconn’s Wuhan plant threatened to jump off the building in a demand for higher pay. There had been a similar rooftop protest at Foxconn in Shenzhen two weeks earlier on 11 April, involving several dozen workers unhappy about being transferred to the neighbouring city of Huizhou. 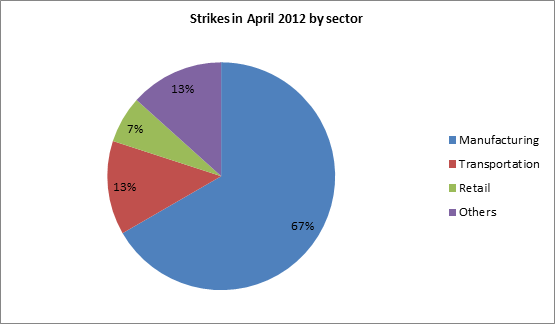 For more information on last month’s strikes, as well as other labour protests in China dating back to January 2011, please see CLB’s new bi-lingual strike map, which now features advanced search options on time, location, employee demands, actions taken and the outcome of those actions etc.