Migrant workers are a lot happier working in relatively smaller cities away from China’s traditional factory to the world, the Pearl River delta, according to a new study conducted by the People’s University of China (中国人民大学).

Cities such as Quanzhou, Qingdao, Changsha and Dalian were at the top of the 20 city happiness index, while the delta towns of Shenzhen, Dongguan and Foshan were ranked 20th, 19th and 17th respectively. The only delta city to do well was Guangzhou, which came in 13th overall or 11th when only younger migrant workers were considered.

Other major cities such as Beijing and Shanghai and Tianjin were well down the list, reflecting the intense competition for good jobs and the inability of young workers to fulfil their dreams in the major metropolitan centres, Hu Ping, deputy head of the university’s psychology department, explained. 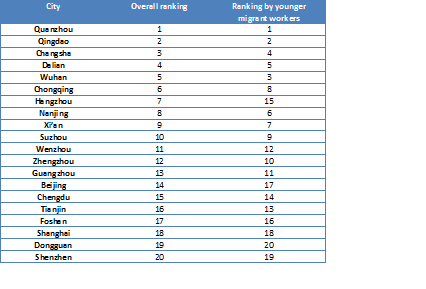 The survey, carried out in conjunction with the job recruitment website 工众, painted a relatively upbeat picture of life for the country’s estimated 240 million migrant workers, with more than 70 percent of respondents saying they felt completely or basically accepted in the cities. However about 30 percent said they still felt excluded.

Although younger workers in particular are now looking to settle in the cities, they did not feel particularly tied to the city they are currently employed in, Hu Ping said, suggesting migrant workers are still highly mobile.

The survey in some ways reflected the development of new employment opportunities in central China as well as smaller coastal cities, as a well as the growing hardships and high costs for workers in the traditional migrant worker employment centres.

Generally the indexes for the overall population and younger migrant workers were inline, the one major exception being the traditional tourist centre of Hangzhou which scored 7th in the overall index but 15th for workers born in the 80s and 90s.