The number of strikes recorded by China Labour Bulletin in March 2012 reached its highest monthly total since we started monitoring worker protests on a day to day basis 15 months ago. A total of 38 strikes were logged across China, primarily in the manufacturing and transportation sectors. Half of the strikes, 19 in all, were related to pay demands, three concerned factory relocations, three strikes were in protest at merger or restructuring plans, and four were related to the payment of overtime. See chart below. 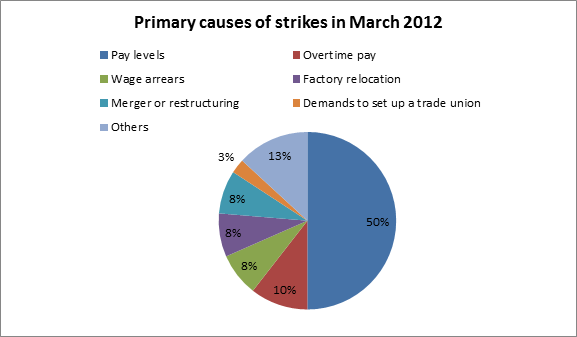 Reports indicate that police were present at 13 of the protests and detained workers in two of them. Eleven protests led to collective bargaining or negotiations with management and in two of those cases the workers’ demands were fulfilled.

There were 17 strikes in the manufacturing sector, five more than in February. Quite a few of these factory strikes occurred in foreign or Hong Kong or Taiwan-owned manufacturers in the Pearl River Delta, and normally involved at least 1,000 workers blocking factory gates or public roads.

Taxi and bus drivers in at least ten cities went on strike in March, with a spate of strikes between 26 and 27 March primarily due to the government’s 19 March fuel price hike. Surveys estimate that taxi drivers will have to pay an extra 400 yuan every month and bus drivers an extra 1,000 yuan per month as a result of the price rise. The Chinese government has pledged to help transport workers cope with rising oil prices by providing subsidies, promoting collective bargaining in taxi companies and regulating the taxi leasing fees that usually take up nearly one half of drivers’ monthly income.

In the education sector, middle school and kindergarten teachers in three cities demanded pay increases in March by staging one-day or half-day strikes. One junior middle school teacher in Zhongshan, Guangdong, for example, claimed her salary was even lower than that of her school’s security guards. 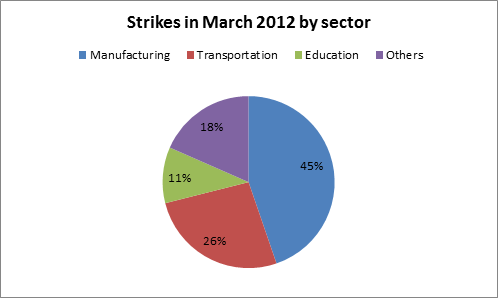 There were two strikes at Foxconn factories in Jiangsu and Shanxi last month, involving a few hundred workers each. Workers reportedly protested against changes in the calculation of overtime pay and unfair wage structures in these two factories.

The Fair Labor Association identified “excessive overtime and problems with overtime compensation” as one the key issues at Foxconn. And in response, the report said, Foxconn has agreed to enhance workers’ participation in committees and other union structures, and has agreed to ensure elections of worker representatives without management interference. “All workers will receive a copy of the Collective Bargaining Agreement and new employees will receive information about union activities during their orientation process.”

China’s economic indicators may be mixed at present but it seems clear that, given factory workers’ increasing awareness of using strikes and protests to bargain for more pay and compensation, it is likely that we are going to see more strikes in the manufacturing sector in the foreseeable future.