A strike by more than a thousand workers at Samsung supplier, Shanmukang Technology in Dongguan, ended over the weekend when the Korean-owned company agreed to increase overtime rates for weekdays and weekends and double the employees’ monthly subsidy. The basic monthly salary however remained the same.

The strike broke out on 27 March when the company, which manufactures and assembles mobile phone cases for Samsung, announced that it would deduct additional social insurance contributions from the workers’ already low basic salary of 1,380 yuan per month. See photo below. 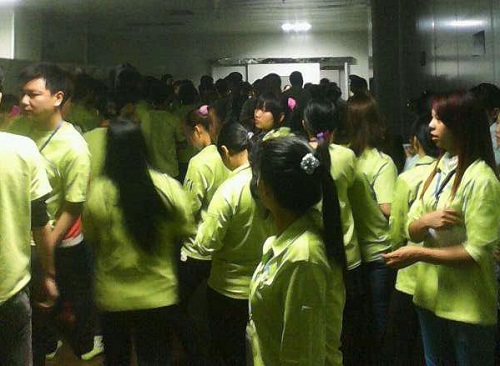 The production line workers, who have to assemble phone cases once every four seconds for more than ten hours each shift, took the lead and went on strike Thursday evening. They were later joined by workers from other departments, including finance, human resources, procurement, and administration, according to one worker’s personal website.

Shanmukang Technology was the subject of an investigative report by China Labor Watch in December 2013, which uncovered dozens of labour rights and environmental protection violations. The factory does not have a trade union or any fulltime workers’ representatives that can resolve grievances through face-to-face negotiations with management.

Shanmukang claims that it has always operated in accordance with the law and vigorously fulfils its corporate social responsibility. However it also said that its 4,500 employees have to work for six days a week, a clear violation of the long-established five-day working week in China.