As China’s economy shows signs of stabilizing, the number of strikes and worker protests has returned to about the same level as last year after a massive surge prior to the Lunar New Year.

China Labour Bulletin’s Strike Map recorded 202 incidents in February and 171 incidents in March, while at the current rate, the figure for April should be in excess of 200. (See chart below). 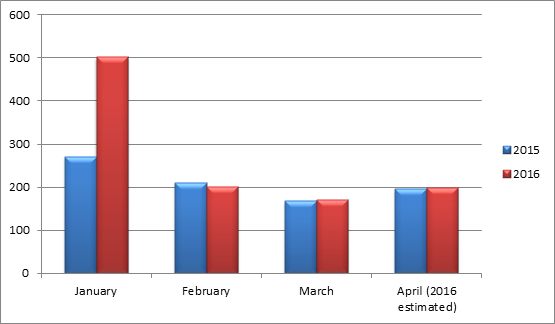 China’s economic growth slowed to 6.7 percent in the first quarter of 2016, its lowest level since the depths of the global financial crisis in 2008-09 but well within government estimates. Last month, the economy began to show signs of recovery with property prices increasing in major cities and trade figures improving beyond expectations.

Analysis of the Strike Map data however shows that there are still serious problems in the manufacturing industry and in services with businesses continuing to fail; laying off workers and refusing to pay the wages, benefits and compensation they are owed.

The steep increase in the number strikes and worker protests in December 2015 and January 2016 can largely be explained by the determination of construction workers, factory workers and miners etc. to get the wages in arrears they were owed before the Lunar New Year holiday. Post New Year, labour unrest has reverted to what has become the “new normal” of workers in a wide range of industries across the whole of China organizing to defend their legal entitlements and protest low pay in the face of economic retrenchment.

Probably the best known example of worker protest was the demonstration by thousands of coal miners in the far north-eastern city of Shuangyashan last month in protest at months of unpaid wages. However there have been hundreds of other protests, predominately in the factories of the Pearl River Delta and eastern coastal provinces, as well as in many new service industries which are still struggling to make headway.

The much discussed lay-offs in the coal and iron and steel industries have yet to have a major impact however, suggesting that the government is being very cautious in its management of the layoffs so as to minimize potential unrest. Many workers in state-owned enterprises have not been officially laid off but are essentially on unpaid vacation, a situation that is clearly not sustainable in the long run.