Women workers in Jiangsu strike after being denied a pay increase

Nearly 800 women workers at a Jiangsu paper mill went out on strike on Wednesday 15 October after being told that they would not get the pay increase that had been awarded to their colleagues because their positions had already been “outsourced” without their consent making them agency labour.

The workers at Gold East Paper Co., Ltd. in Zhenjiang staged a peaceful sit-in at the factory gate holding banners stating: “Sisters, let’s stand together and safeguard our rights!.” Police were called in and clashes led to several workers being injured, with at least five hospitalised. They later took their protest to the streets. See photo below. 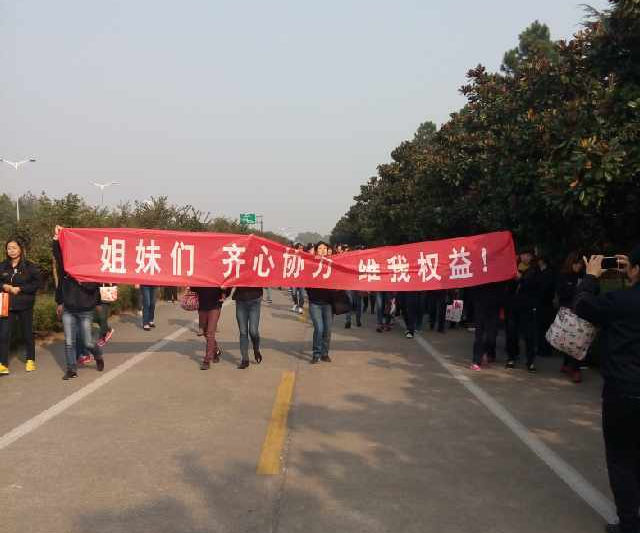 The dispute was triggered on 12 October when the workers went to management and demanded an explanation for the decision to deny them a pay rise. During the discussions, they were insulted by a human resources manager who told them to “shut up or sod off!”

This was the last straw for the workers many of whom had worked at the plant for several years. “We will not take this nonsense anymore, they want us to shut up and that is last thing we are going to do,” said a worker who preferred not to disclose her identity. “Neither will we go without putting up a fight. If the company wants to fire us they will have to pay the price.”

The workers questioned where the factory trade union was during the strike. “The union’s only presence at our factory is collecting union fees from our monthly salary,” said the worker, while another said “They (the union) have always sided with the company.”

The company union actually shared an office with the factory’s “culture and propaganda department,” whose spokeswomen claimed that the workers had got it all wrong but then refused to say what the real situation was. As of Friday evening, the workers were still on strike.