“Management is making concessions but we don’t need to. We have always demanded double compensation and victory is in sight. I hope you will not be tempted by unripe fruit,” Huang told a union meeting on the morning of 28 March. See photo below. 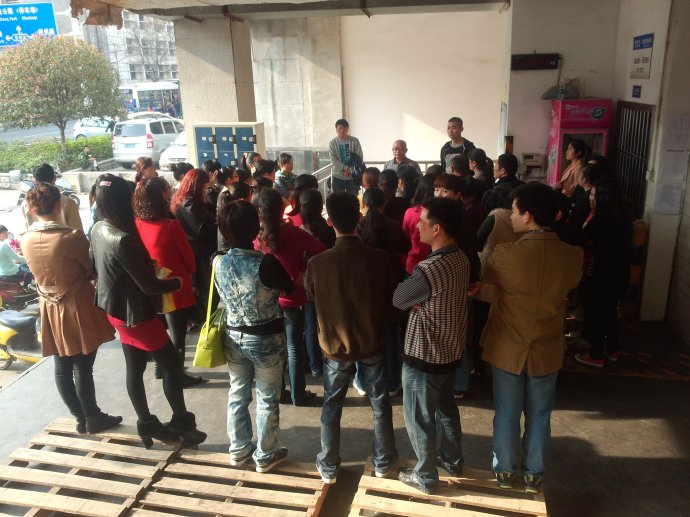 Walmart management have stated that the company will pay employees the existing compensation offer as part of their salary on 29 March regardless of whether or not they sign to deal currently on the table. But Huang urged the workers not to be distracted by small prizes and to resist any attempts by management to divide them.

The workers have so far remained united in the face of intense pressure from management and the local authorities. Several workers were beaten and detained when police moved in on 21 March to clear the store. The detained workers were subsequently released and vowed to continue the fight for reasonable compensation.

The dispute erupted on 4 March when Walmart management announced, without any consultation, that the store would close down in two weeks’ time. Employees, many of who had worked at the store for several years, were told they could either accept redundancy or move to another store. But given that the nearest store was more than 100 kilometres away, this was not a realistic option.

The store trade union organized a picket and demanded collective bargaining with management to resolve the issue. Management has thus far refused face-to-face negotiations with the union and workers. It seems most likely at this point that the dispute will go arbitration.