Just five days after the Chinese government announced ground-breaking reforms to the country’s pension system, the Ministry of Human Resources and Social Security has stated that both wages and pensions for public sector employees will go up in order to compensate for any losses caused by the reform plan.

China News reported on 19 January that the basic salaries for China’s eight million civil servants and 32 million employees of public intuitions, plus the actual pension benefits paid out to public sector retirees would be adjusted in line with the new pension policy that requires them, for the first time, to pay their own pension contributions.

The report said details of the new arrangement had been passed to the government organizations and public institutions concerned. However, local governments are well-known for their selective implementation of central government policy and there is no guarantee that low-paid public sector workers such as teachers will actually see a pay increase.

However, as CLB noted last week, teachers and other public sector workers have shown they are more than capable of taking collective action if the local authorities and schools continue to cheat them out of a decent wage. Indeed, on the same day that the ministry announced the pay and pension increases, more than 200 middle school teachers in Huzhou, Zhejiang, staged a demonstration outside the county government building in protest at low pay and the withholding of benefits etc. See photo from Sina Weibo below. 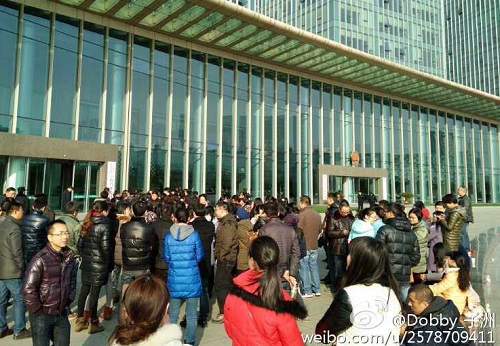 Under the new pension policy announced by the State Council on 14 January, public sector workers employed after 1 October 2014, have to pay 12 percent of their salary into the pension fund, while the government contributes another 28 percent every month. Upon retirement, the monthly pension will be based on the retirees’ average salary over the years, the average salary in the local area, and the total number of contributions paid in.

This means that a high school teacher hired today in a major city like Guangzhou, for example, could have to pay a total of 360,000 yuan in pension contributions over 35 years but still get a lower pension upon retirement than teachers who retired last year. It is unclear at present what real impact the promised pay and benefit increases will have once they go into effect.