The long-awaited trial of Shenzhen worker activist Wu Guijun descended into farce yesterday when the hearing was first cancelled by the Bao’an District Court because the prosecutor failed to show up and then reopened for just one hour in the late afternoon.

Around 50 supporters including workers, labour activists and journalists had gathered outside the small courtroom that could only accommodate nine observers on the afternoon of Monday 17 February waiting for the hearing to start.

At the scheduled start time of 2.30.pm, the court suddenly announced that the room would be used for another hearing. At about 3.40, the court told Wu’s wife Zhou Yuzhi, his sister Wu Guifang, and four key witnesses that the “prosecutor couldn’t make his way to the court today” and thus the hearing had to be rescheduled.

When the judge only agreed to speak with Zhou in private, the crowd became furious and stormed into the court’s petitioning office. See photo below. “It is a hoax! Why do they have to make us wait for more than one hour? We demand an explanation!” one worker shouted. “They have to tell us where the prosecutor is? Why can’t he be here? We - the taxpayers - are paying their salaries to work, not to be absent!” another said. 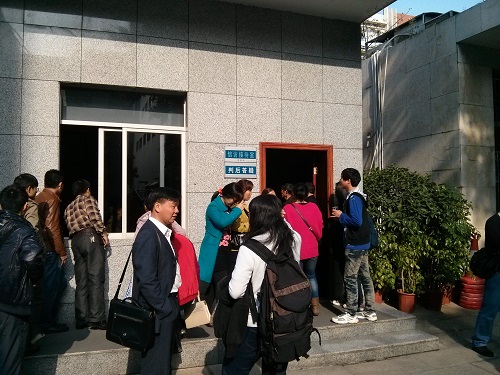 I haven’t seen my husband since 24 May 2013, the day after he was detained, and I really looked forward to today. The prosecutors moved him from the police station to a detention centre within two days at that time; I don’t understand why they are so inefficient that they couldn’t even show up this time around.

One of Wu’s lawyers, Duan Yi, said it was a very rare and bizarre incident. “I don’t know if anyone did it on purpose, the possibility of such things happening is definitely less than one in five hundred.”

Duan Yi and co-counsel Pang Kun pressured the court to let the case go ahead and it eventually agreed to assign an interim prosecutor to start the hearing at around 4.30.pm and transfer the hearing to larger courtroom. Pang said the hearing lasted for only an hour and no further hearings were scheduled. No witnesses were called during this short session.

Wu, a 40-year-old migrant worker and father of two, was charged with “gathering a crowd and disturbing the order of public transportation” after several hundred workers at Hong Kong-owned furniture maker Diweixin, took to the streets last May in protest at their employer’s refusal to discuss compensation for a planned closure and relocation of the factory.

The Shenzhen trial follows a hearing in Guangzhou on 20 January in which 12 hospital security guards were tried for similar public order offences after staging a rooftop protest at the hospital on 19 August 2013.  No verdict has yet been announced in that case.

In both cases, the workers were forced to take extreme action after their employers repeatedly refused to discuss their long-standing grievances and the local authorities did nothing to help them. The decision to prosecute these workers is clearly a retrograde step by the local authorities who are struggling to deal with the increasing number of labour disputes in Guangdong, many of which are related to factory closures and relocations.