The massive wave of teachers’ strikes in the north-eastern province of Heilongjiang at the end of last year may have been just the beginning. Like many public employees in poor rural areas, the Heilongjiang teachers were unhappy with low pay, wages in arrears and long working hours, but their key demand was the abolition of a pension policy, introduced in the province in 2004, that required them to pay their own pension contributions.

Now, despite the manifest opposition to the plan, the government in Beijing looks like it is determined to roll-out the pension reforms piloted in Heilongjiang across the whole country.  Caixin reported on 5 January that a comprehensive pension reform proposal, drafted by the Ministry of Human Resources and Social Security, had been approved by the State Council and the Party Central Committee.

The proposal is aimed at ultimately getting rid of the so-called “two track system” for state and private sector employees. Unlike private sector workers, those who work for the government; civil servants, doctors, teachers and other employees of public institutions, don’t have to pay their own pension contributions and yet they still receive a generous state-subsidized pension upon retirement.

There are more than 38 million people currently on the government’s payroll, among them about 17 million teachers. Although some teachers in major cities are reasonably well-paid, many in smaller cities and rural areas have very low salaries, especially when compared to civil servants in the same district. For example, some teachers in Heilongjiang with 20 years’ experience could only earn 3,000 yuan a month.

The warning is well-warranted. Teachers across China have already demonstrated that they are willing and able to stage strikes and protests against low pay, wage arrears and working conditions, as well as government policies that would leave them worse off such the recent introduction of performance-based pay systems. CLB’s Strike Map recorded 82 teachers’ strikes last year, double the number in 2013 and four times the figure for 2012. See map below.

Teachers strikes in China in 2014 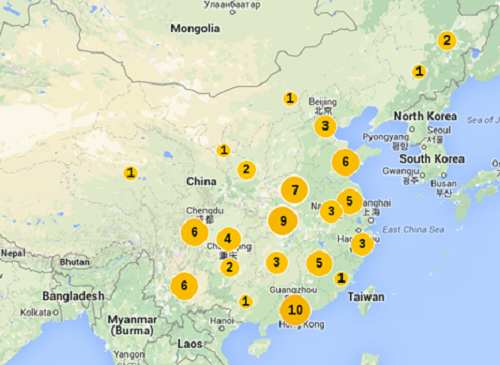 One teacher in a small city in Guangdong said he and his colleagues were already over-worked and underpaid and would oppose any attempts to take away what limited benefits they still had:

The new pension policy is just one of many problems in education right now. Although I haven’t seen any collective protests around here yet, I’m sure people will do what they have to do when they are pushed into a corner, just as our colleagues in Heilongjiang did.