Last year, China Labour Bulletin embarked on a new project to investigate the concrete work of China’s myriad trade union officials, assess what they are doing right and point out where there is room for improvement. In October 2018, we published our first report 工会改革观察与促进 第一期（2018年8月）, which examined the response of local trade union officials in Guangdong to seven collective labour disputes (recorded on CLB’s Strike Map) located in their jurisdictions.

We transcribed our conversations with local union officials and analysed how their actions in each case matched up to the demands of the Communist Party leadership in terms of the Party’s trade union reform agenda.

The main aim of the project is to hold the trade union accountable to its members (China’s workers) and urge officials to play a more proactive role in standing with the workers in their disputes with management. As such, all the reports are in Chinese but we will produce occasional extracts in English (such as the case study below) to give international trade unionists a better idea of how the All-China Federation of Trade Unions, and its local federations, actually function on a day-to-day basis. 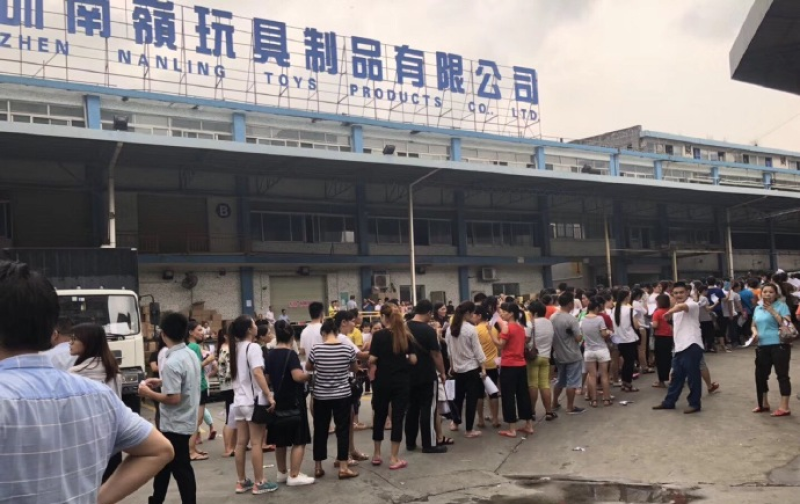 The Hong Kong-owned Nanling Toy Factory in Shenzhen was first established in 1992, and employed more than 4,000 workers during its heyday. However, falling demand and rising costs in the 2010s eventually led the company to end production for good in August 2018.

On 28 August 2018, hundreds of workers at the Nanling Toy factory in Shenzhen’s Longgang district staged a protest demanding the payment of two months’ wages in arrears and lay-off compensation after the factory suddenly announced it was closing. The workers said that, at the time of the closure, they were already struggling to cover their regular monthly expenses and children's school fees because of the delayed wages. Moreover, veteran employees, who had spent many years working at the factory were angered by the fact that they had been offered no compensation at all for their loyalty. Others were suffering from chronic health issues due to long-term exposure to the harmful chemicals used in the production process. However, their appeals to the local government for help were reportedly met with police repression and brutality.

Following this well-publicised incident, CLB staff contacted the Longgang District Federation of Trade Unions in order to ascertain the union’s response. The officials told us that there was no enterprise trade union at the factory and that none of the employees had contacted the district federation for help. However, the federation was aware of the dispute.

An official in the federation’s unionisation department (组建部) explained that they had actually attempted to set up an enterprise trade union at Nanling Toys in 2018 but that the factory had closed down before they could complete the procedures. On further questioning, the official admitted they had made only limited progress and had not even arranged for the election of factory union officials before the facility was closed down.

Asked why the local union had only just started to organize at a factory employing thousands of workers that had been around for nearly 30 years, the official said:

We only got the reports this year, the guys below us at the local [sub-district] level only reported the fact that they had not set up a union there this year. Before that, they did not report anything. I am not too clear myself what the reason for this is… This year, we’ve been sorting out the files. Only then did they report, and we set about establishing a union.

There are thousands of enterprises in Longgang district but fewer than five staff at the federation’s unionization department. In 2018, the federation had plans to set up unions in 202 enterprises (with at least 25 employees each) across the district. It was assumed that Nanling Toys was one of the targeted enterprises.

Because most enterprise owners are reluctant to set up a union, district federation officials said they have to push to make any headway:

I always have to rely on our staff to go out there and knock on doors. Only then, can they get the job done. In reality, not everyone is willing to unionize so very often we have to go in there and discuss with them, only then can we organize a union. That’s for most cases.

“That would be terrific, and we will certainly help them to set up a union,” she said. However, it would be quite rare for the district federation to deal with such an application because ordinary workers would usually have to apply at their sub-district office to set up a union.

For more information about the Nanling case, the official suggested we contact the head of the district federation’s rights protection department (权益保障部), Li Guotao, who was directly involved in the negotiations related to the factory closure. However, Li was unwilling to talk to us. “Sorry,” he said, “I cannot answer your questions without verifying your identity…”

Based on our interviews, it seems that the officials at the Longgang District Federation are willing to help workers organize, it is just that they are not very good at it and lack the motivation to proactively engage with ordinary factory workers. Instead, the still rely on talking to enterprise managers and trying to persuade them to let the union in.