On the morning of 17 July 2014, Zhou Jianrong, a 49-year-old worker at the GCL Footwear factory in Shenzhen, jumped to her death from the top of a four-storey workshop inside the factory complex. Zhou was one of several GCL workers who had just been fired in a long-running dispute with management.

The blood stain on the cement floor had still had not been washed away when Zhou’s two daughters and other family members from Chongqing arrived in the evening. Around two hundred workers then marched silently to the scene of the tragedy with Zhou’s family to commemorate their friend and colleague. 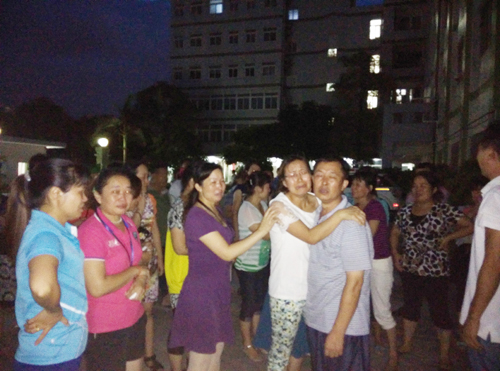 Zhou Jianrong’s husband and daughter, together with her co-workers, gather at the scene of the tragedy on the evening of 17 July.

“I could not believe my ears when I heard the tragic news this morning. She was like a younger sister to me,” said Du Chunmei, a close friend of Zhou. “It was the company that pushed her to the limit. She must be heartbroken when she found out that her work station where she worked for the past 12 years was no longer there. For God’s sake, she entered the factory at 5:20 and jumped at 5:48, it must be the most horrible 28 minutes for her.”

A medical team tried to revive Zhou at the scene but failed. She was then rushed to the emergency room at a nearby hospital where she was pronounced dead. The family and Zhou’s co-workers demanded an explanation from the company and tried to get to Zhou’s body inside. They were quickly dispersed by hundreds of riot police who took the body by force and transported it to a funeral parlour.

The actions of the police and the callous attitude of the factory’s managing director Yang Xianying, led to hundreds of workers going out on strike again on the 17th and 18th. In addition, 626 people and 23 non-governmental organisations signed an open letter on social media that expressed condolences and sympathy for Zhou’s family, condemned the factory’s cold-blooded management, and demanded better enforcement of labour laws and real trade union representation.

The tragedy was triggered by a long-running labour dispute in which GCL fired as many as 109 workers following a series of strikes in May. The last batch of workers was fired on 16 July for “staging strikes” and “impeding company production.” Zhou was among them.

The workers explained that they initially took industrial action because they were represented by an incompetent union. When a “long-term service compensation” deal was rescinded by the new owner of the factory, the workers feared that their pay and benefits would be cut too and decided that it was in their best interest to demand a one-off payment based on their years of service.

However management refused to negotiate and even hired thugs to intimidate and beat the striking workers, two of which were hospitalized. The local trade union turned a blind eye to the violence and failed to stand up for the workers and safeguard their rights even after the deputy chairman of the factory trade union was sacked.

“There were people from the Shenzhen Federation of Trade Unions here every day during the strike,” said Li Fengrong, Zhou’s husband who also works at GCL. “But they never wanted to represent us or negotiate with the company. All they did was to put pressure on us and tell us to go back to work.”

Many workers felt the local government too was siding with the company: “They were warning all of those who took part in the strike not to take similar action,” said Dai Qiang, a worker suffering from a work-related injury who was among those sacked. “Many people from the government shout out our names in the middle of the night and try to find out where we live. There was one time they even broke in my apartment building with a crowbar, trying to get me.”

Five days after the tragedy, Zhou’s family hasn’t been able to make any progress in negotiating with the company over compensation.