Around two hundred rural doctors in three separate counties across China have reportedly resigned in a growing protest over low pay, excessive workloads and the repeated failure of local governments to pay the healthcare subsidies owed to them.

More than 100 doctors in Yilian county, Heilongjiang, collectively resigned in mid-July. The doctors told Caixin that the county government owed them around 16 million yuan in fees paid out for patients under the New Rural Cooperative Medical Scheme but that the government had only agreed to reimburse them 600,000 yuan.

They were followed on 18 July by 22 doctors in Xihe township in the southwestern province of Guizhou, who resigned over decreased wages and missing pension fund contributions.

A total of 64 doctors from two townships in Tongxu county, Henan, submitted their joint-resignations in late June and early July. They also complained of delayed reimbursements as well has the heavy burden of providing grassroots medical services to the rural community. One doctor told The Paper:

“It is a really tough job, as well as providing healthcare, we are responsible for the clinic administration and public health education work in the community. To be honest, it is really exhausting.”

Rural doctors (村医), who used to be known as barefoot doctors, are hired to provide basic medical care in the community. In addition to their heavy workload, they are paid less and have fewer benefits than fully-qualified doctors in public hospitals.

Their status mirrors that of China’s community (民办) and substitute (民代) teachers who have consistently been denied the same rights as public school teachers by rural county governments that claim they don’t have the financial resources to pay them.

Around half of all the protests by education workers recorded on China Labour Bulletin’s Strike Map this year have been by community and substitute teachers, many of who were laid off or forced to retire without the pension and other welfare benefits they were entitled to.

Teachers in the western province of Shaanxi have been particularly active, staging at least six protests so far this year in the provincial capital of Xi’an, with the most recent incident occurring on 20 May. 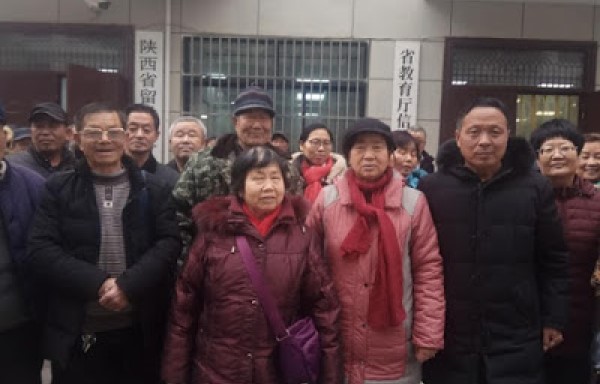 Retired teachers protest outside the provincial education department in Xi’an on 14 January this year. Photograph from Chinese social media.

As mentioned in our July newsletter, many healthcare professionals in small towns are also grossly underpaid and often suffer from the non-payment of wages and unequal welfare benefits.

The Chinese government has made the eradication of rural poverty by the end of 2020 one of its top policy goals. However, the focus of the campaign so far has been on getting rid of absolute poverty in the remotest areas of western and south-western China. Very little investment has been made in healthcare and education in China’s relatively poor rural areas. As a result, doctors and teachers are struggling to survive and rural residents are denied the services they desperately need.