A strange thing happened when Taiwanese touch screen manufacturer Wintek suddenly closed its two factories in Dongguan last week: The more than 7,000 workers at Wintek’s Dongcheng and Songshan Lake plants left without a fuss after getting their last pay cheque and a reasonable severance package based on their years of service.

One worker told the South China Morning Post: “Those working at the factory for between half a year and one year got about 6,000 yuan in compensation. I got about 12,000 yuan for working for two-and-a-half years."

However, the more than 200 businessmen whose companies supplied the Wintek factories and who were reportedly owed 230 million yuan were not so happy: “It's an absolute swindle," said Hu Zhi, a supplier who claimed he was owed two million yuan. Another supplier complained that: “All the Taiwanese managers ran away and we have no way to contact the Taiwanese company.”

This is a situation that Chinese workers have been dealing with for many years. For a long time it was almost standard practice for factories in southern China to sell off inventory and assets, cut back on overtime and give workers extended unpaid leave before suddenly closing the factory gate and skipping town without paying wages or severance pay.

But nowadays workers are wise to these moves and can quickly organize themselves to prevent the boss from leaving without paying what they are owed. Perhaps Wintek realised it would just be asking for trouble if it tried to leave 7,000 angry workers stranded.

Maybe they had seen what had just happened at the Xinsheng shoe factory in Guangzhou where workers fought an intense three-month battle for compensation after the company threatened to close down and relocate without paying them a cent.

The company tried to convince the workers that it could only pay them after selling off the factory’s assets but the response from the workers’ chief negotiator Qin Qingmei was short and to the point.  “This is bullshit! Sell or buy as you please, it has nothing to do with settling this labour dispute,” she said before making a counter-offer and walking out of the meeting.

The company retaliated by calling the police and getting Qin and several other workers leaders arrested but the workers held firm and after 88 days they finally agreed a deal in which they got around 12,000 yuan on average. It was not as much as they wanted but it was better than nothing. 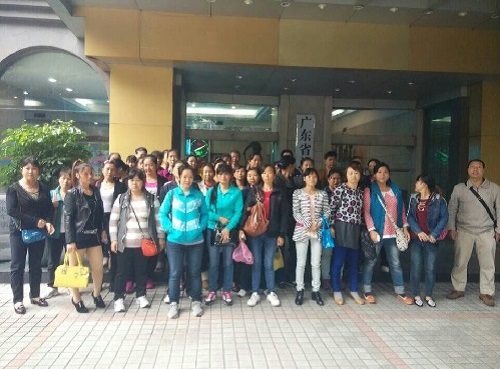 Workers from Xinsheng Shoes seek help from the Guangdong Federation of Trade Unions in getting their representatives released from detention.

“It was a hard-fought war. The workers faced repression, learned to forge alliances with other parties and most importantly made compromises when necessary,” said Chen Huihai, a collective bargaining expert advising the workers.

During the three-month campaign, workers not only elected their own representatives and engaged with management in collective bargaining, they also solicited help from the local trade union federation, and raised more than 16,000 yuan in donations for their strike fund, including one donation reportedly from high-ranking government official.

Factory owners seeking to close down their business will probably still try to cheat their workers in the future but, thanks to the rise of worker activism across China, they are far less likely to get away with it.