Today marks the first anniversary of the tragic death of Zhou Jianrong, a 49-year-old worker at the GCL Footwear factory in Shenzhen. Zhou jumped from the top of a four-storey workshop on the morning of 17 July 2014, soon after learning that she and several other colleagues had been fired in retaliation for their activism. 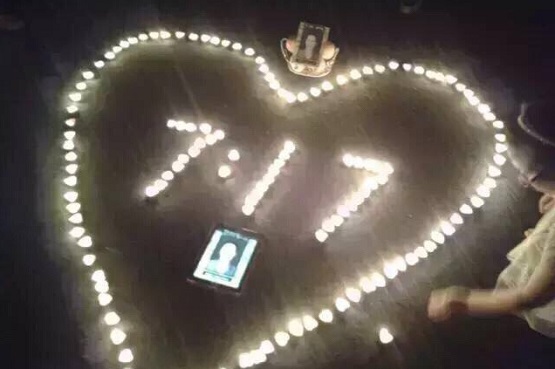 To mark the occasion, a group of workers and labour activists known as China Labour World (中 国劳工界) issued a statement commemorating Zhou’s sacrifice and calling on China’s workers to overcome their difficulties through determined and unified collective action. Their statement is translated below.

To all Chinese worker brothers and sisters:

One year ago today, Shenzhen GCL worker Zhou Jianrong, in the face of unbearable persecution by her employer, leapt to her death.  At the time, we issued a statement calling for 17 July to be commemorated as China Workers’ Sacrifice Day. The statement was signed by 41 labour and social welfare organizations as well as 1,708 workers and other members of society. This evening, labour organizations will be holding various commemoration activities in mourning and in memory of Zhou Jianrong and offering comfort to all other workers who have suffered injuries and persecution.

With sadness and regret, we acknowledge that there has been little change in the suffering endured by Chinese workers over the last year. On 4 August 2014, a massive explosion at Zhongrong Metal Products in Kunshan, Jiangsu, killed 146 workers and injured hundreds more. On 13 December 2014, Wang Youzhi, a construction worker seeking wage arrears, had four of ribs broken by police, and his wife, Zhou Xiuyun, was killed after a police officer broke her neck. This year, millions of migrant workers suffering from pneumoconiosis and other occupational injuries are on the brink of death.

The reckless action of employers, sometimes using hired thugs, combined with the ineffectiveness of the legal system in China has taken a huge toll on workers. According to rough statistics, in the Pearl River Delta alone this year, dozens of workers have been arrested, more than 1,000 have been detained and several thousand workers have been fired in retaliation for their participation in collective action.

During the course of collective actions at the Lide and Xinsheng shoe factories in Panyu, the Tengqi machinery and Citizen factories in Guangzhou, the Hisense Kelon factory in Shunde, the Foshan Arts and Crafts factory, the Zhongshan Cuiheng bag factory, the Sonie Shoe factory in Dongguan, and the Shenzhen Artigas garment factory, and many others, workers and labour activists have been physically attacked, harassed and threatened. Labour groups helping these workers have been forced to close or relocate.

Workers’ injuries can be divided into two categories: the first is physical harm; work-related injuries and occupational diseases etc. The second category is social harm; the damage caused by the system of labour relations, institutional injustice and the exploitation, oppression, and abuse of workers.

Controlling occupational hazards is of course a technical matter but it is not technicians who make the decisions in the workplace. All too often, the decisions are made business owners, administrators and government officials who wilfully neglect workplace safety, labour and environmental laws and regulations for the sake of their own personal benefit.

History tells us that the only way to get rid of the physical harm of occupational hazards is to first get rid of the social harm that is the root cause of those hazards. The key task is to establish a democratic, lawful, fair and just economic, political and social system in which workers’ rights to life and health, personal dignity, economic management, political participation, social protection, cultural development, etc. will be fully protected.

History also tells us however that these systems and these rights will not fall from the sky. They can only be obtained through struggle. Brothers and sisters, it is not difficult to be aware of one’s own suffering; the difficulty lies in first recognizing the source of that suffering. However, the biggest difficulty is finding the tools and methods to eliminate the source of that suffering. And this is something that we have to do for ourselves; no one else can do it for us.

China’s workers are in the midst of a great transition from a passive suffering class into a proactive, self-reliant class. During this period, the shock value of a worker suicide can of course help reveal the causes or source of our suffering but we should not see this as a means of eliminating the causes of that suffering.

Only the collective struggle of labour that can heal the wounds in workers’ hearts and save them from the abyss of isolation, helplessness, despair and darkness!