Nearly a year after they were sacked for taking part in series of strikes and sit-ins at a Nokia factory in Dongguan, a group of 70 workers are still fighting for reinstatement on the basis of illegal dismissal.

The Dongguan Intermediate Court on 13 October upheld the decisions of the local arbitration committee and the court of first instance in February and July respectively, who both ruled that the workers’ dismissal had been lawful.

The 70 dismissed workers are represented by the veteran labour lawyer Duan Yi, Director of the Shenzhen-based Laowei Law Firm. Duan has consistently stressed that the courts need to understand and take into account the reason why so many workers went out on strike in the first place. 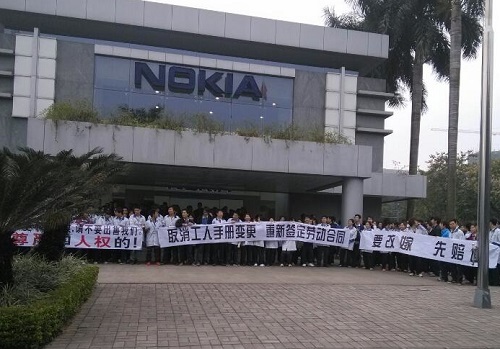 Nearly 3,000 workers staged a series of protests in late November last year (see photo above) after management at Nokia repeatedly failed to address employee concerns stemming from the announcement that Microsoft had agreed to acquire Nokia’s mobile phone business. Duan pointed out that this was clearly an organised collective action and as such the company could not use individual workers’ violations of the company rule book as an excuse to sack them.

Moreover, Duan noted that the workers simply had no option but to strike because the enterprise trade union was largely impotent and did not represent the interests of employees. The local trade union federation has likewise been reluctant to support the 70 dismissed workers in their demands for reinstatement.

Local trade union federations often lack the experience and expertise as well as the political will to effectively represent workers in such cases. For example, the Shenzhen Federation of Trade Unions promised to help 20 worker representatives gain reinstatement after being sacked by IBM for leading a strike in March this year but nothing has come of that promise.

One reason for the courts’ reluctance to rule in favour of the workers is the impact such a decision might have on the business environment in Dongguan. The city has long been one of China’s most important manufacturing hubs but it has seen a decline over the last five years as factories close down and move to cheaper locations. The Dongguan authorities are anxious to retain as much business as possible, especially hi-tech industries such as the Nokia mobile phone business. A ruling in favour of the workers might be seen as blow to the authorities’ well-publicised attempts to create a hi-tech and high-value-added business hub in the region.

It should also be noted that although Nokia has sold the factory to Microsoft, the workers were Nokia employees when they were sacked and as such the company is still responsible for on-going case.