Around 30 private schools, set up to provide a basic education for the children of migrant workers in Beijing, have been ordered to close, leaving nearly 30,000 students with an uncertain future as the new school year begins, the Beijing News reported today.

The affected schools are all located in the outlying districts of Daxing, Chaoyang and Haidian that have been home to migrant worker families for many years, even decades, but are now under increasing pressure from property developers as the city expands ever outward. 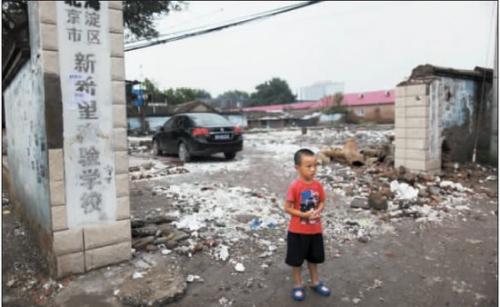 At least one school, New Hope Primary, in Haidian’s Dongsheng village, which provided schooling for 800 children, has already been demolished. See photo from Beijing News above.

Most of the district government closure orders issued in June cited illegal construction, illegal operation and safety concerns as the reasons for closure, although many schools had been operating technically illegally for many years without any government intervention.

The Chaoyang District Education Department announced that “not one student” would be left without a school place, and that measures were in already place to find alternative schooling. The government claims that students that can produce proof of attendance at local schools (借读证明) will be allowed to study at state schools free of charge, while others will be allocated places in schools approved by the education department.

However, migrant school principals in Chaoyang said the number of approved schools in the district simply could not cope with the estimated 3,900 students needing a place. Moreover, the Chaoyang government made the same pledge to find places for all the children affected by the previous round of closures at the start of 2010 spring semester, but parents complained that they were basically left to find new schools for their children by themselves.

This is precisely what is happening in Haidian, where parents have been told by the local government they have to provide “five documents” (五证) showing evidence of residency, employment, etc. before they can even apply for a place at a local state school. For self-employed migrants, and those in temporary or casual work, the so-called “five documents” are an insurmountable threshold.

The Beijing News reported that of the 1,400 students at the recently closed Red Star Primary in Haidian, only 70 parents had been able to gather the required “five documents” and apply for a place in the state system. At the New Hope school, 100 parents had applied but another 100 had already decided send their children back “home,” leaving 600 children in limbo.