At least 10,000 workers at shoe-making factories owned by Yue Yuen Industrial in Dongguan took to the streets Monday 14 April 2014, protesting the company’s failure to pay its 70,000 employees their full social security and housing fund contributions. 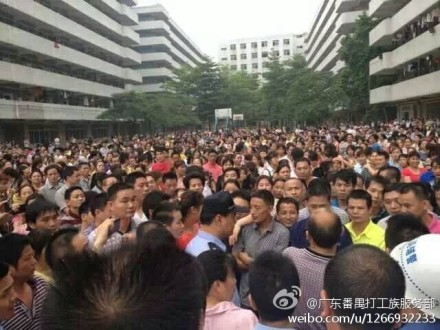 As the peaceful demonstration wound down around 5.30 pm., hundreds of riot police armed with batons reportedly rushed the crowd and grabbed about ten of those who had held banners and threw them into a police van parked nearby.Two of the arrested were women. Four workers were beaten and hospitalized.

The company, which had vowed to provide a solution to the dispute which first broke out on 5 April when hundreds of workers blocked a local bridge, announced on Monday that it would only agree to sign new contracts with all its employees as of 1 May and refused to pay the social security contributions and public housing fund payments in arrears.

“The company hasn’t paid us since 2006, today’s announcement shows that they knew all along and don't want to pay a penny!” said a mid-level manager named Xue. “Some of my colleagues estimate that Yue Yuen owes the workers as much as one billion yuan over the years.”

“Someone set up a QQ group before the 5 April event and thousands joined,” said Xue. “But they were quickly ‘shut-up’ and the initial group was scrapped. Now we have four new online groups, and the number of those want to join is growing.”

According to former long-time employee, Mr Zhu, “Yu Yuan has been shifting production from Dongguan to those inland provinces as well as Vietnam and Indonesia for several years, but those workers who devoted their best years to the factories are not going to go quietly.”

The protests continued on Tuesday when an estimated 40,000 workers downed tools and several thousand took part in a protest march across the town.