Is Li Keqiang more at home in Davos than in Beijing?

I only ask because the Chinese premier seems to have spent the last week or so in Beijing getting very frustrated, banging his fist on the table and chastising bureaucrats for failing to carry out his economic reform agenda or wasting their time with pointless risk assessments for major project developments.

I get the impression that Mr Li considers the bureaucrats and local government officials he has to deal with to be largely incompetent; at best under-qualified and overly-timid, at worst thoroughly corrupt and larcenous. By contrast, he seems much more comfortable and happy in the company of chief-executive officers of major international corporations, global financiers, and other high-flyers who claim to actually get things done. 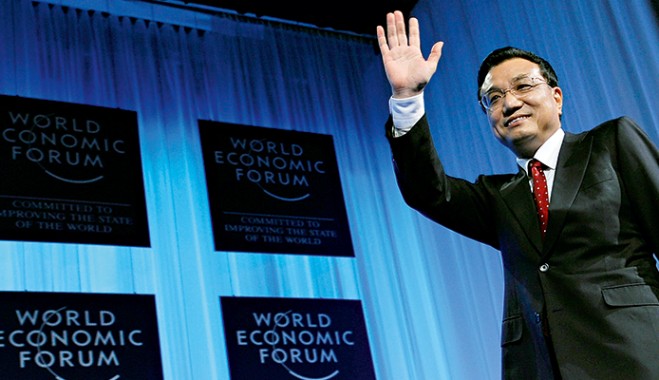 Mr Li was in his element at the World Economic Forum’s annual meeting in Davos this January where he gave a keynote address, and in the interview with the Financial Times on 31 March, in which he outlined his vision of China as an integral part of the global financial and economic system. The Davos crowd speak the same language as Mr Li; they are concerned with same issues, and basically want to see the same thing - stable and balanced global economic growth led by innovation and free markets.

This, for example, is Mr Li talking to the Financial Times about currency devaluation:

We don’t think companies in China should mainly rely on a devalued Chinese currency to boost exports. Instead, they should focus on enhancing their competitiveness by raising the quality of products and making technological innovations... We don’t want to see a scenario in which major economies trip over each other to devalue their currencies. That will lead to a currency war. And if China feels compelled to devalue the Rmb in this process, we don’t think this will be something good for the international financial system. This may ultimately lead to trade protectionism and impede the globalisation process. This is something we don’t want to see.

Mr Li is a student of law and economics. He attended China’s elite Beijing University where he headed the school’s Communist Youth League. This allowed him to gain a foothold in the central Party structure. Under the tutelage of the eventual General Secretary Hu Jintao, he quickly rose through the ranks all the way to the premiership in 2012, at the relatively young age of 57.

He is not exactly what you would call a man of the people. Even on meet the people photo-ops, Mr Li can seem somewhat aloof and generally lacks the populist appeal of his (even more elite) boss. I could be wrong but I don’t think Mr Li is a regular at his neighbourhood dumpling restaurant.

The question is, I guess, does any of this really matter? After all, with the possible exception Uruguay’s former president, Jose Mujica, state leaders are by definition elitist. But Mr Li’s apparent preference for macro-economic models over real people, and his growing impatience with those beneath him is troubling, particularly as it parallels an increasing authoritarianism and intolerance of dissent in the government as a whole.

China needs to encourage not supress social dialogue. In particular, it is crucial that government leaders listen to China’s hundreds of millions of workers who are pushing for decent pay and better working conditions. To ignore the demands of China’s workers and focus only on what those in the global elite want is just asking for trouble.