Hong Kong-based Students and Scholars Against Corporate Misbehavior (SACOM) and local trade unionists staged a demonstration this morning (25 May) outside the Hong Kong corporate headquarters of Foxconn to protest and mourn the alarming number of deaths of young workers at the electronic giant’s Shenzhen facility this year. 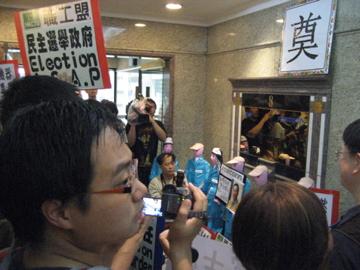 Protesters gather outside the entrance to Foxconn's offices in Hong Kong
The protesters demanded that Foxconn raise wages to 3,000 yuan a month, so as to guarantee a living wage for workers in Shenzhen, encourage the trade union to develop a collective force and a sense of collective identity to combat the feeling of isolation and alienation at the plant, and establish an independent investigation into the suicides.

The demonstration in Hong Kong’s old industrial district of Lai Chi Kok coincided with the ninth such suicide at Foxconn in Shenzhen this year. The official Xinhua news agency reported that a 19-year-old man who had only been working at the plant’s training centre for 42 days fell from a building in the early hours of Tuesday morning. 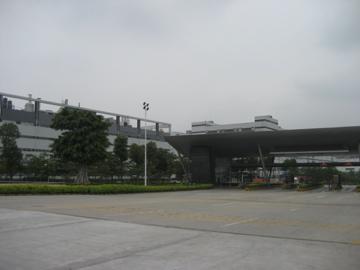 The approach to Foxconn's Shenzhen plant
All of the victims thus far have been aged between 18 and 25 years old. SACOM’s Jenny Chan has investigated this disturbing trend in Dying Young: Suicide and China’s Booming Economy, available as a pdf here.