A worker activist at the Hitachi Metals factory in Guangzhou who lobbied for the establishment of a trade union at the enterprise has been sacked, just a few days after the company started to recruit union members.

Zhu Xiaomei had been the target of management reprisals from the moment she first stood up for workers’ rights at the factory last year. In August of 2013, just a few months after Zhu organized workers to demand payment of social insurance premiums, the company reassigned her from a management position to that of attendant in the archive room and put a surveillance camera above her desk. 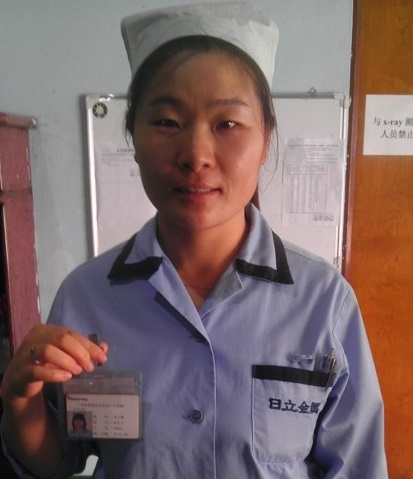 Zhu (left) was issued with several warnings for alleged violations of company regulations. She was warned on 3 January 2014, the day the company announced the trade union recruitment, and on 14 January, she was issued with a final warning and her employment contract terminated.

“The factory is afraid that I will be elected as the chairwoman of the union,” she said. “By then I would be protected by the Trade Union Law but they are determined to kick me out before that.”

Zhu was referring to Article 51 of the Trade Union Law, which stipulates:

Any organization that, in violation of the provisions of this Law, retaliates against the functionaries of trade unions who perform their duties and functions according to law by transferring them to other posts without justifiable reasons shall be ordered by the labour department to rectify and reinstate the functionaries; if losses are caused therefrom, compensation shall be made to them.

In an encouraging development, the district and municipal trade union federations have rallied behind Zhu and provided her with free legal advice and are pushing for talks with the company. The trade union’s lawyer Zhang Xianchun warned that factory that:

If Ms Zhu goes to court, she will have a much better chance of winning than you. Please keep in mind the fact that, unlike the factory, Hitachi doesn’t run the court.

Meanwhile, other activists are taking action to prevent the factory from setting up a bogus trade union and are mobilising other workers to push the factory to hold a genuine democratic trade union election as soon as possible.

Hitachi Metals is a wholly-owned enterprise in the southern suburbs of Guangzhou that had been operating without a trade union since it was founded in 1997. Most of the 1,500 workers had kept their heads down until long simmering grievances came to the boil after one worker suffered a serious spinal injury during a work accident in April 2013.

Angry workers signed a petition protesting management’s treatment of the injured worker and Zhu went to a local labour rights organization for support and advice. Staff at the Sunflower Women Workers Centre pointed out that Hitachi had been infringing workers’ rights for years by not establishing an enterprise trade union and not providing social insurance for its workers.

After the factory ignored numerous formal and informal approaches by Zhu and her colleagues, she got several workers to write a letter to factory’s parent company in Japan demanding payment of social insurance premiums.

She then continued to push, with the help of the district and municipal trade union, to establish an enterprise trade union. On 3 January 2014, the factory finally put out a notice to recruit union members. Ten days later, Zhu Xiaomei was sacked.