Guangzhou factory workers seek support from the trade union: The union lets them down

The non-payment or underpayment of social insurance and housing fund contributions by employers is endemic in China, and a frequent cause of labour disputes. China Labour Bulletin’s Strike Map has recorded 96 collective protests by workers over unpaid or underpaid social insurance contributions so far in 2018, 40 of which occured in the manufacturing sector alone.

China’s official representative of labour, the All-China Federation of Trade Unions (ACFTU) is clearly aware of this fundamental problem but so far has done little to address it. Indeed, when workers seek the union’s help in standing up to management violations of the law, local officials are at a loss, as the recent case at Tongrong Electronics illustrates. 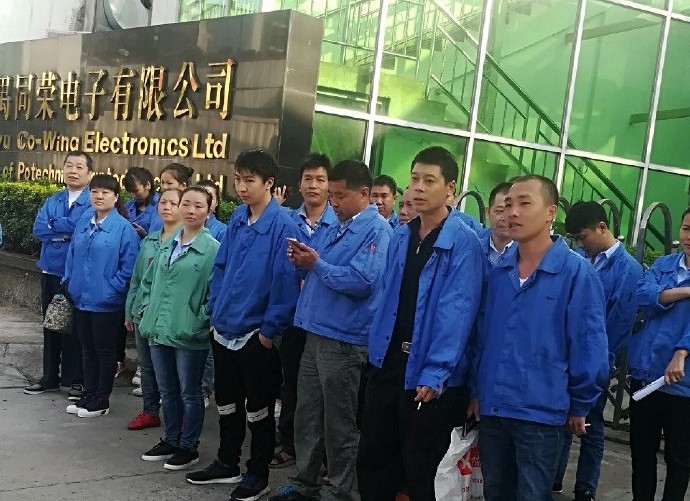 The Tongrong workers, as observed in countless other cases in recent years, displayed a deep knowledge of their legal rights and management’s obligations, but more importantly, understood that it is the union’s job to represent their interests at the bargaining table. They included the local Panyu district union in their call for negotiations to solve the labour dispute.

The union’s response by contrast shows how far it still is from the stated reform goal of bolstering its legitimacy among grassroots workers. The day after workers issued the collective bargaining call, a man claiming to work for the sub-district union visited Tongrong Electronics, rejected workers’ demands for proof of identification, grabbed a worker’s phone in anger and tried to mislead them into believing that social insurance back pay should be retroactive only until 2008, flatly ignoring the Labour Law implemented since 1995.

Then on 1 November a task force including representatives from the district and sub-district unions and labour supervision officials participated in a collective bargaining session at the company. Workers were dismayed at the union officials’ inaction. Many officials kept silent during three hours of bargaining and failed to stand in solidarity with workers even after management admitted failure to comply with labour laws and regulations.

A week later, Tongrong workers decided to bring their case to social media, publishing in detail the failure of the union to represent their interests and the bureaucratic response from labour supervision officials.

Workers enjoyed a very short-lived victory: on 13 November another collective bargaining session concluded with management agreeing to pay back years of social insurance and housing fund contributions, the Panyu district union also promised to facilitate the payment within three days. However the next day workers were asked to present material evidence including employment contracts and salary payment slips which they did not necessarily have because company management failed to sign contracts with them in the first place. “As the enterprise had admitted its failure to pay the social security premiums over the years, why should the workers, instead of the employer, be the one to prove this violation?” the workers demanded.

The union and labour supervision officials had bluntly chosen to turn a blind eye to Tongrong managements’ violation of laws, and instead put the burden of proof on employees who had already successfully made the company admit to its violations of labour law.

Reprisals against worker representatives came quickly. On 16 November, nine workers were forced to take a three-weeks leave while others were also forced to take leave on normal working days. The company claimed orders had declined but the workers understood it was simply a ploy to punish workers for taking a stand. In response a group of about 40 workers staged a rooftop protest.

Frustrated with the outcome of the two bargaining sessions, workers rejected further negotiations with management. Although none of the workers’ demands had been met, the local labour department claimed in its social media account the dispute had been successfully resolved.

More recently, on 23 November, the Guangzhou municipal union, the Panyu district union and sub-district union together with the labour supervision bureau hosted a third collective bargaining session. Instead of acknowledging the collective nature of the dispute, the Guangzhou union suggested that workers take their case to arbitration, individually.

In the end, the union not only failed to represent workers interests, despite management acknowledging it had violated the law by not signing labour contracts with employees and underpaying social insurance and housing funds, the union also effectively dismantled a genuine collective case into lengthy individual legal cases to be fought by each worker in court. By doing so, the  union is violating articles 9 and 58 of the Social Insurance Law, which stipulate:

Since the approval ACFTU’s Reform Pilot Program in November 2015, slogans like “eliminate the four impediments” (regimentation, bureaucratisation, elitism and frivolousness) and “increase the three attributes” (political consciousness, progressiveness, popular legitimacy) have been accompanied by a series of measures at the official union’s organisation and operational levels, with an emphasis on increasing union membership and promotion of migrant workers to higher positions within the organisation.

The Tongrong workers struggle stands in sharp contrast with the ACFTU’s self-congratulatory pronouncements at the 17th National Trade Union Congress last month, The union’s actions simply reinforced the general perception of workers that it sides with management at the bargaining table. Instead of representing workers interests, the union has helped bosses dissolve a collective labour struggle.

“Why should migrant workers continue to believe that we can rely on the union?” the workers asked on social media.