Trade union reform: Comparing the achievements claimed by the ACFTU with results on the ground

In this English-language extract from CLB’s new report on the workers’ movement in China (中国工人运动观察报告2015-2017), we look at what the All-China Federation of Trade Unions (ACFTU) claims to have achieved in terms of union reform and what actually transpired on the ground. For the Chinese original please see pages 34 to 38 of the report under the heading 全总声称的改革成果与现实情况的比较. 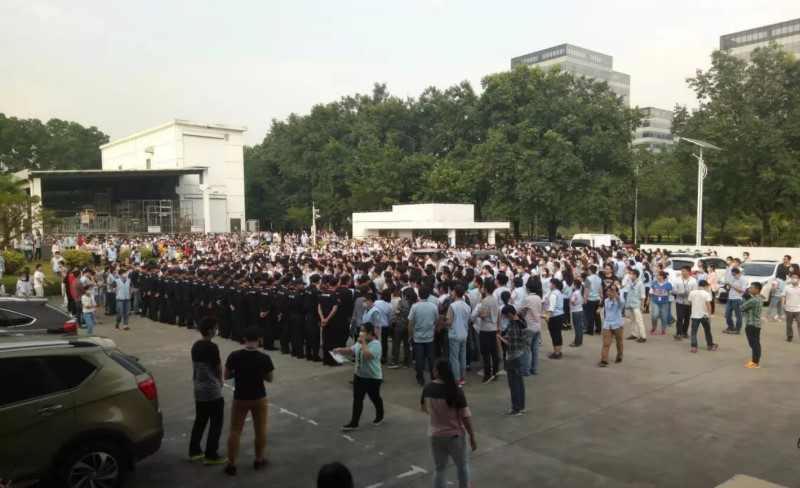 When thousands of workers on strike at Sony Electronics Huanan in Guangzhou in November 2016, the Guangdong provincial trade union was powerless to help.

The first “major achievement” in the new era of trade union reform claimed by the ACFTU was the appointment in January 2016 of a “migrant worker,” Ju Xiaolin, as the union’s vice-chairman.

This was followed by the publication of numerous sets of data and pronouncements demonstrating the success of the reform program. If you scratch beneath the surface however you quickly discover another reality.

The focus of this propaganda was “eliminating the four impediments” (regimentation, bureaucratisation, elitism and frivolousness), which was to be achieved through optimizing the ACFTU’s organizational structure, reforming the management style of officials, and devolving power so as to stimulate grassroots engagement and enhance the influence and cohesiveness of trade unions.

For example, in 2016, the Shanghai Municipal Federation of Trade Unions allocated 73 million yuan for the development of trade union organizations in small towns and cities, the training of 15,000 officials, and the creation of 184 worker service stations. In addition, the ACFTU issued a number of new or revised policies aimed at revitalizing grassroots trade unions including The Regulations on Grassroots Union Elections.

However, as we can see from the more than 6,000 cases mentioned in this report, workers’ collective actions are spreading from coastal to inland areas and from traditional manufacturing industries to emerging service industries. Clearly, the ACFTU’s focus on the four impediments has not been linked to workers’ evolving interests and the distribution of income, and has failed to address the fundamental conflicts between labour and capital in the workplace.

The ACFTU’s reform program has also focused on increasing the number of migrant workers in the union. Migrant worker membership did increase by 15 million in 2015 and again by 15 million in 2016, bringing the total to 140 million or about half the total membership. By September 2016, there were 2.82 million grassroots unions with a total membership of 302 million, according to official figures.

However, the construction industry, which is almost entirely composed of migrant workers, is still a major centre of worker unrest (as evidenced by CLB’s Strike Map). Organizing construction workers has always been a problem for the ACFTU, given the multiple layers of subcontracting that is endemic in the industry, and trade union officials still betray a sense of awkwardness in discussing this issue. A union official in Lanzhou, for example, told us that even though recruiting migrant workers was a long-standing problem, local officials had in fact never come up with any solutions. Instead, this official, preferred to blame the workers themselves for not having sufficient awareness to join the union. Meanwhile, a union official in Heyang county, Shaanxi, said the union should focus on construction companies rather than workers in its organizing work. With regard to the numerous wage arrears disputes involving construction workers in Heyang, this official said the union could only help recover wages for workers who were already union members but noted that most migrant workers could not join the union. Another official in the nearby city of Weinan stressed that the problem stemmed from the high mobility of labour and seasonal nature of work in the construction industry. The local union was also under-staffed, he said, preventing them from doing a good job. However, if these union officials are really serious about reform they would shake off these tired excuses and get to work in identifying and training trade union activists among the workforce and shift the focus away from the local union office and towards the workplace and the construction site so as to give workers the resources they need.

Unfortunately, the results so far show that the reform initiative has failed to change the deeply ingrained habits and thinking of trade union officials in China. Based on our interviews with officials, we can identify four key opinions regarding union organizing: 1. Higher level unions set targets for organizing which are then manipulated by lower-level unions. 2. Tasks can only be completed with sufficient resources. 3. Unions can only be established by working with employers. 4. The union can only represent those workers who are already union members. While the first point is indeed a problem that is shared with many government departments, the second and third points reveal a basic misunderstanding of how a union should operate, and the fourth is just an excuse used by union officials to shirk responsibility. After two and a half years of trade union reform, it is clear that old habits die hard in the ACFTU and that union officials still regard migrant construction workers as incapable of standing up for themselves, rather than as a new source of strength for the union. The reform achievements boasted of by the union so far are little more than meaningless figures, and they certainly do not signify that the union has now become a genuine representative of labour or protector of workers’ interests.

In addition to the top-down imposition of collective contracts, the union has also tried to intervene in some collective labour disputes and resolve them through negotiations. However, unlike labour NGOs (as discussed in Part Two), the trade union does not represent workers in bargaining with management but rather sees itself as a neutral third party. Take, for example, the dispute at Sony Electronics Huanan Co. Ltd in Guangzhou that broke out on 10 November 2016 when 3,000 workers went out on strike in protest at the planned take over by a Chinese-owned company, Shenzhen O-Film Technology. The workers demanded that Sony Electronics publicise details of the planned acquisition, provide severance payments based on the length of their employment at the company, and give workers the right to decide whether or not to sign a new employment contract with O-Film. The company responded by calling the police and firing many of the workers’ leaders. Because the workers had no faith in the factory union, the Guangdong provincial union parachuted officials in to resolve the dispute. On 14 November, the Guangdong federation organized talks between labour and management at which the workers put forward four demands: 1. Compensation based on length of employment and the right to sign a new contract with O-Film. 2. The company must not sack or retaliate against any of the strikers. 3. The company must pay compensation to sacked workers. 4. The company should identify the security guards responsible for beating employees.

The company rejected all these demands out of hand and the talks were deadlocked. The union officials were helpless to prevent the company from escalating its intimidation of workers in a bid to force them back to work, and the strike resumed on 15 November. The police were called and 11 workers were arrested. The company continued to dismiss worker activists with the total number of sacked workers reaching 64 by 29 November. Throughout this struggle, the Guangdong union remained silent, and in the end the strikers were forced to resume work with none of their demands met. Workers said the company forced them to sign a return to work agreement by stipulating that employees would not be allowed to swipe their work card if they did not sign. If cards are not swiped for three days or more, the company will classify that employee as having completed their work and automatically terminate their employment.

All the trade union did during this dispute was to act as a third-party facilitator or mediator, a role that should have been played by local government officials. The union did not represent the workers, officials did not advise or train the workers in bargaining strategies, they did not help formulate the workers’ demands or suggest the best way to present those demands, or how to respond to management intimidation and when to compromise and when to stand firm. And most importantly, they never bothered to participate in the negotiations. When management started to dismiss worker activists and coerce workers into returning to work, the union did nothing to stop them and made no effort to resume bargaining.

The Guangdong provincial union should be given some credit for actually getting involved in this dispute but it took the wrong approach from the outset, seeing itself as a moderator rather than a representative of labour. At the end of the dispute, the union provided legal assistance to fired workers and helped them claim the compensation and benefits they were owed but this is simply a continuation of the ACFTU’s well established policy of only helping workers after their rights have been violated and the damage already done. It had nothing to do with the focus of trade union reform which should be to get directly involved in the enterprise and help resolve disputes before they escalate into conflict.

Even when it comes to the basic task of protecting workers’ rights, local unions are often all-at-sea, both in terms of their internal communication and liaising with government departments. Take for example the protests in May 2017 by employees of two Yonghui superstores in Chongqing over the cancellation of annual leave, arbitrary fines, unpaid overtime and arrears in social insurance contributions. In this case, the local trade union officials that we spoke to admitted that they were cocooned within their own departments and that there was minimal sharing of information. For example, organizing, collective bargaining and rights protection should be inseparable but in the local Chongqing trade unions they are divided up into three separate departments. Moreover, since one of the store trade unions was set up by the district trade union, which installed the company’s human resources manager as union chairman, the sub-district union said it had no authority to get involved.

This kind of bureaucratic separation of duties not only gives trade union officials an excuse not to act, it also makes it much more difficult for workers to approach the union and seek help. Workers are usually passed from one department to another with no trade union official willing to take responsibility for workers’ specific problems. For example, when investigating the Chongqing superstore case, we were directed by the Banan district union to call the local union in the Huaxi sub-district where one of the stores was located. However, the phone number we were given was actually the personal number of a union official who had retired the previous year and had no idea what was going on.

It is clear that in relying on the local Party and government departments for their power, local trade unions have abandoned their identity as worker representatives and can only act as a third-party facilitator between labour and management. Local unions have no ability to effectively coordinate their work and have to rely on the local Party and government for help. Within this context, the ACFTU acts like a lazy chef who claims to invent new dishes (making it easier to organize at the grassroots) and repairs old pots (the collective consultation system) but never actually uses them and instead just serves the workers the same warmed up left-overs that offer a vague promise of rights protection.