The grim and mundane reality of work accidents in China

One year after the catastrophic explosion at a hazardous materials warehouse in Tianjin that killed 173 people, including 104 firefighters, the local authorities are determined to make sure there will be no repeat of the disaster this year.

The Tianjin government issued a notice on 20 July calling on local officials to intensify their safety inspection work during the summer, “stay vigilant and take all measures possible to prevent major workplace accidents,” it said. Of particular importance, the notice said, was the control of dangerous chemicals such as hydrogen sulphide and ammonia – both of which had been stored at the warehouse prior to the explosion. A few days later, the local government in the New Binhai District, where the blast occurred, conducted a training course on work safety and disaster management for the combustible gas industry. And on the national level, the State Administration of Work Safety published new regulations on 3 June requiring companies to devise detailed contingency plans for workplace accidents.

At the same time, the authorities are trying to persuade the public and the media that lessons have been learned from the 12 August 2015 disaster, that those responsible for it have been punished, and that it is now time for everyone to move on. Huge billboards placed around the now sanitized blast site call on people to unite in the construction of a “bright future” and not dwell on the past. 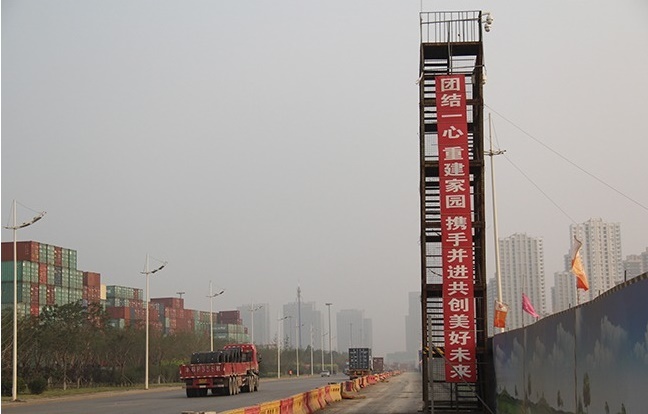 According to the official narrative, everything anyone needs to know about the explosion was contained in the State Council’s investigative report on the disaster, issued on 5 February, which concluded that the explosion had been caused by the ignition of dangerous chemicals stored at a warehouse illegally operated by Ruihai International Logistics Co. Ltd. The report identified 123 people, primarily local government officials and company executives, who were deemed responsible for the disaster which caused nearly seven billion yuan in economic losses.

The State Council report was designed to be the final word on the subject, and indeed there has been very little follow-up in the official Chinese media since then, and especially now that the Olympic Games are dominating the media agenda. The Southern Weekend did revisit the scene of the explosion for the one year anniversary in late July but its report (天津港心事“812” 特别重大火灾爆炸事故周年回访) was quickly removed from the newspaper’s website.

The desire of the Chinese government to divert the public’s gaze away from past disasters and take forceful measures to prevent new ones is entirely understandable. However, focusing only on the prevention of (and the public relations management of) major accidents actually does very little to improve workplace safety on the ground.

In the first six months of this year, there were 24,495 work-related accidents and 13,723 work-related deaths in China, representing a drop of 9.8 percent and 8.1 percent respectively, compared with the same period in 2015, according to the State Administration for Work Safety. The figures are significantly lower than those published in previous years due to a change in the way the government calculates and classifies work accidents, but even these revised figures produce an average rate of 135 accidents per day and 75 deaths each day.

The vast majority of these accidents and deaths stem from small-scale incidents that never get reported in the official media. Even those events that do get reported, such as those recorded on China Labour Bulletin’s Work Accident Map, tend to be relatively routine or largely unremarkable. Spectacular events such as explosions, fires and floods only accounted for about 18 percent of the incidents recorded on the Work Accident Map in the first half of this year. The majority of events were related to structural and mechanical failures, particularly during maintenance or repair work, and traffic accidents, such as street cleaners being hit by cars.

The end of May this year was a fairly typical week for accidents in China. From 23-30 May, the Work Accident Map recorded:

These accidents are so commonplace and so widespread that very few people pay any attention to them. Yet, for the workers involved and their families, these accidents still cause untold emotional and economic distress. It is also important to note that many of the workers injured or killed in these minor incidents do not get anything like the compensation they are entitled to by law, and certainly not the high-profile compensation awards given to the families of the firefighters in Tianjin, who each received 2.3 million yuan from the government. Many poor and vulnerable workers in remote areas in China will be lucky to get anything at all, especially if their employer is in league with local government officials who can cover the accidents up.

For work safety in China to really improve, the government and policy makers need to stop fixating on major accidents and mass casualties in high-risk industries, and start thinking about ways to improve day-to-day safety in all of China’s workplaces. As CLB and many other labour activists have pointed out on numerous occasions over the last two decades, the key to improving work safety is getting workers involved.

Following the Kunshan factory explosion in August 2014, which killed at least 146 workers and severely injured dozens more, a group of labour activists and academics issued an open letter arguing that since factory owners and local governments have failed to protect workers, the workers themselves should be given the right to supervise workplace safety.

The letter noted the failure of Zhongrong Metal Products to remove hazardous dust, install proper ventilation equipment or dust-level monitors or provide workers with adequate protective clothing. Moreover, it noted that the Kunshan municipal government had completed a round of safety inspections just a week prior to the explosion but that no violations had been reported.

Dai Chun, associate professor at a Hunan trade union school and one of the letter’s authors, explained that problems with work safety were part of a wider failure to incorporate workers' rights into China’s economic development model. As such, the authors called on the government to give workers the authority to supervise safety in the workplace.

Veteran labour lawyer, Duan Yi, noted at the time that Holland has workplace safety committees comprised of representatives from the workers and company, as well as administrators from the government. Moreover, the workers’ representative acts as the committee’s director. “When it comes to whether an elevator needs repairing, for example, neither the boss nor the administrator has the final say. It is the workers,” said Duan.