Doctors, nurses strike in Shandong after murder of paediatrician

Last week more than 100 healthcare workers at the paediatrics department of a hospital in China’s northeastern province of Shandong went on strike and held a memorial service for a doctor who was brutally murdered on 3 October by the angry father of a patient.

The strike began in conjunction with a memorial for Dr. Li Baohua, a 34-year old paediatrician at the Laigang hospital in Laiwu, Shandong. Nearly one thousand people, including doctors, nurses, medical students and parents of those Dr. Li had treated, gathered at the hospital, calling for justice.

Hospital management attempted to break the strike and went after its organizers. After the strike began the hospital’s director ordered staff to return to work, but they refused. Hospital administration singled out organizers in private meetings, and local police intervened in memorial activities. The Laigang hospital union, however, organised a donation campaign for Li’s family and extended their condolences. 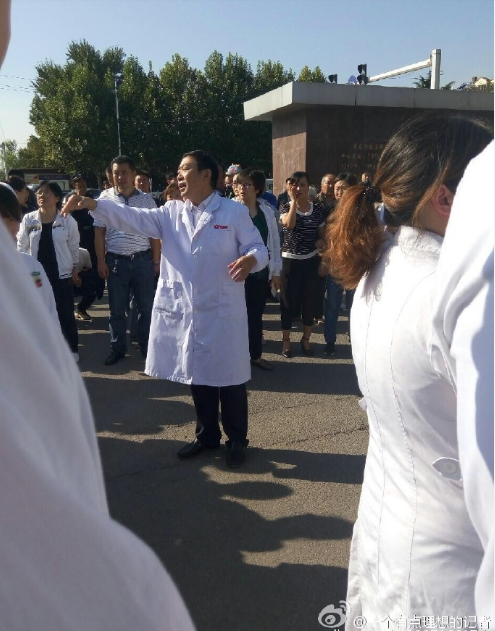 The attacker, surnamed Chen, was the father of a child born at the hospital in January of this year with congenital deformities and severe medical conditions. When Dr. Li explained the child’s conditions to the parents, they refused to continue the treatment and the child died two days later. Thereafter Chen demanded to speak with hospital directors, but when they reportedly ignored his requests, he sent hired assailants to destroy property at hospital offices.

The murder took place at around 11am on 3 December. After working more than 10 hours on the night shift, Dr. Li  was on his way to the changing room when he was attacked by Chen with a machete. After severely injuring the doctor, Chen prevented medical staff from delivering aid. By the time Dr. Li was able to receive treatment, it was too late, and he died that afternoon. According to local media reports, he was struck numerous times, including at least 12 blows to the head. Chen was arrested soon after the attack and is now under criminal detention.

In the days after Dr. Li's death, hospital staff carried on actions for days despite management’s attempts to disband them. The staff ignored orders from the administration, and established a makeshift memorial at a nursing station on 6 October. The following day, in the face of pressure,  the Laigang Hospital held a memorial at the hospital’s funeral home. Hospital management, however, stopped non-hospital staff from attending the service and prevented those attending from taking pictures, displaying protest banners, chanting slogans or disseminating information about the event.

Social media conversation of staff members told that inside the memorial service, “the only people wearing civilian clothes were police officers”, “we went to pay homage, and our hearts were heavy and we cried, but the hospital administration felt that emotions ran out of control, and all were forced to leave.”

Dr. Li’s wife Ma Yuan, who works as a nurse in the same hospital’s neurosurgery department, attended the funeral service. The two have a six-year-old son.

A Sina report quoted one doctor on social media: “A doctor can work a 16 hour night shift without proper rest, but this doctor did not die of exhaustion on the job, he left us in this horrific fashion, at 35 years old! Could it be that we healthcare workers have to rely on the loss of our own blood to defend our rights?”

After the incident, multiple government departments issued statements. Among them, the National Health and Family Planning Commission and the Ministry of Public Security condemned the crimes against  medical staff and called for a zero-tolerance policy toward this kind of violence, andsevere punishment of the offender.

This kind of violence against medical staff has been on the rise in China. In the face of so many incidents,  multiple government departments issued a joint policy back in April 2014 meant to specifically address violent crimes against medical staff, but the policy has had little success in preventing  cases such as Dr. Li's from happening.

CLB reported this year of at least six incidents of violence against medical staff that occurred across China in the month of May; with three attacks on eight doctors on 23 May alone. In 2015 CLB’s Strike Map recorded nine incidents of collective labour actions by doctors and nurses who primarily protested against poor wages and working conditions, as well as privatisation.

A white paper published by the Chinese Medical Association in 2015 reported that 60% of medical staff had been subject to verbal abuse, and  13% to physical violence, while only 27% reported having never been  subject to violence. The report also emphasised the extreme pressure on medical staff caused by massive workloads, poor relationships with their patients and their family members, and the rising number of attacks on medical staff.

China’s public medical system is chronically underfunded. For years this problem has led to hospitals charging for services and over-treatment which in turn has led to mistrust among patients, not to mention rising costs. At the same time, the more business-oriented operations of public hospitals and their management have sidelined medical staff from having any influence over  working conditions, even life-threatening ones  like overwork and violence against staff.

When patients become angry with the hospital system, it is always the staff - doctors and nurses - who are the first victims. In the wake of this incident, there will surely be more medical staff who will  take collective action to ensure their own safety and their rights.