Covid-19 and the crisis of informal labour in India

With India’s national lockdown set to be extended, P.K. Anand argues that the time has come for the Indian government to wake up to the precarious reality of labour relations in the country.

The idea that “social distancing” and home confinement is the key to fighting the Covid-19 pandemic is gaining currency among global political leaders. Perhaps the most extreme example of this trend has been here in India, where the entire country has been put on lockdown.

Social distancing has necessitated dramatic changes in the world of work – a shift of workplaces into virtual mode, or working from home etc. However, such neat and easy segues come with privileges, as only certain categories of work can be bracketed for the same, even in the developed world. In fact, only those with sufficient resources and support at home, such as the availability of a stable internet connection, for example, can qualify.

As witnessed since the start of the outbreak in China early this year, the most critical functions during public health calamities are performed by those who do not have the luxury of moving away from their sites of work – sanitation workers, food delivery workers, taxi drivers, nurses, and paramedics. These workers have problematized the concept of social distancing, critiquing its ubiquitous “one size fits all” narrative.

The heart-wrenching images and stories of millions of migrant workers leaving Indian cities following the declaration of a three-week-long nation-wide lockdown have starkly illustrated the need to pause such simplistic epidemic control measures and wake up to the reality of labour relations in India.

The Prime Minister’s televised national address on 24 March provided just four hours for the country’s 1.3 billion citizens to stock up and get behind closed doors, which ended up cutting loose the poor and vulnerable, living on the margins and leading a mostly hand to mouth existence.

That this massive workforce was not taken into account while making such a critical governmental announcement is reflective of their invisibility in the state’s consciousness and policymaking. Amidst the closure of workplaces and avenues of employment, the lack of clear and positive assurances from the political leadership only exacerbated these workers’ anxieties, and compelled them to make the long walk home, from the cities to the hinterland.

Furthermore, the already dire situation was made more acute by the absence of transport on account of the sealing of borders of states/provinces, and it ensured that the workers with their belongings and family members had to traverse long journeys by foot without food or proper drinking water. Such blindness in giving a mere four hours of notice for a national lockdown that massively impacts hundreds of millions of low-paid workers only serves to highlight the privileging of the middle class and urban elite in policy formulation and practice. 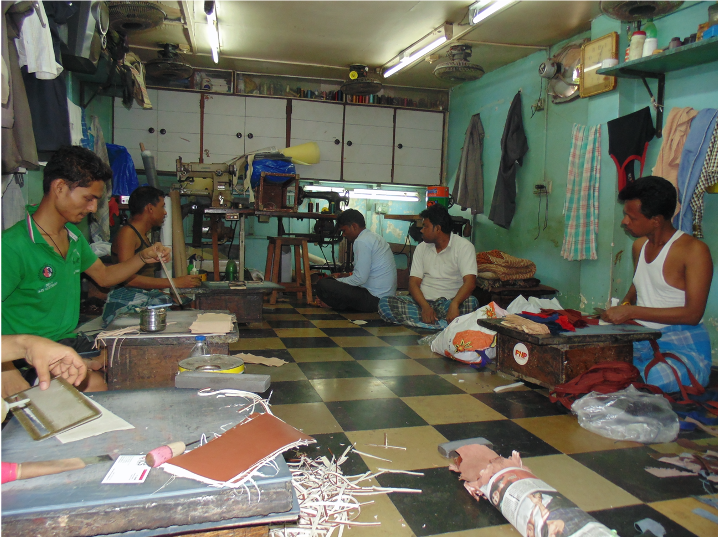 By far the most vulnerable section of the workforce during the lockdown are those in the informal sector – mostly unskilled, low-paid, with no or at most fuzzy employment contracts, employed in precarious work environments, and lacking any form of social security or welfare safety net. Given regional differences and the precarious nature of their work, it is very difficult to assess exactly how many Indian workers fit into this informal category. That said, the Periodic Labour Force Survey by the National Sample Survey Organization, Government of India for 2017-18, estimates about 415 million informal workers, including vast numbers of rural-to-urban migrants. They are spread across sectors like construction, manufacturing (in factories, workshops and even homes), domestic work, street vending, waste pickers and recycling, sanitation, restaurants, food delivery and allied services, and all forms of transport. They are usually paid by the day with daily rates ranging from Rs.400 to Rs.1000 (US$5 to US$13). This does not offer much scope for savings; in fact, many informal employees do not even have proper bank accounts in which to store their earnings.

Seasonal and circular migration undergirds informal labour in Indian cities. These workers do not permanently relocate to the cities (many of them are not accompanied by families); in fact, they circulate between cities and villages several times a year. Undoubtedly, the sheer volume of seasonal and circular migrants and their high mobility poses difficulties for the authorities in managing this population. However, administrations and regulative mechanisms have often tended to use that as a convenient excuse to shirk their responsibilities. Such unwillingness to take into cognizance the importance of the informal workers, and make them integral to the urban space, both in terms of policy and practice, makes the state ill-prepared to anticipate and act during crises.

The precarious living conditions in the cities and constraints in accessing civic services due to improper registration mechanisms are running themes in most of the Global South; the narrative draws obvious parallels with China’s household registration system that institutionally disadvantages rural migrant workers.

The understandable mistrust of the state by informal workers as further laid bare by the pandemic and lockdown, has its roots in the hostility and highhandedness shown by the police and apathy of the judiciary.  Instead of effectively discharging its constitutional responsibilities, the higher judiciary has faced criticism for absolving the central government in its handling of the migrant workers. As a result, the robustness of the Indian democratic system, built on the accountability of institutions, has come under sharp scrutiny.

The predicament of informal workers also makes us delve into the questions of caste and gender. The most vulnerable and disadvantaged even among the informal workforce are those belonging to the lower castes, including those at the frontlines, performing critical tasks that are considered ‘menial’ or taboo. Societal constraints and patriarchal barriers on mobility have also severely impacted female workers during the crisis, especially those involved in domestic labour and care work.

Looking ahead - the way forward

After three weeks, and with the lockdown now set to continue until the end of the month, the implications for livelihoods are far-reaching. The International Labour Organization estimates that 400 million informal workers in India will sink further into poverty as a result of the Indian government’s handling of the Covid-19 crisis. This should spur the central and state governments into coming up with real and tangible solutions. And given the way India’s federal structure is constructed, especially with regard to revenue and financial resources, it is the central government that should lead the way.

Surveys of migrant workers have indicated the need to universalize social policies and support systems, rather than for the state to take a backseat and let the workers fend for themselves. The pandemic has only reiterated the need for new government policies and practices that offer a comprehensive solution. On 8 April, the central government initiated a four-day exercise to create a database of migrant workers across the country, in order to come up with a relief package. The exercise seeks to collect information on a variety of areas and intends to cover all forms of informal work.  While this sounds promising, so far, the central government’s half-hearted, interim measures still largely fall within the confines of the present economic system and offer little real help to those most in need. What further raises apprehensions is that instead of offering real stimulus, the state may be resorting to an austerity drive.

The low state capacity in India means that the government would have to involve civil society organizations working on the ground with informal workers to formulate plans and policies, in line with the needs and requirements of specific sectors; this co-production while ensuring involvement of multiple stakeholders would also make ideas neither entirely top-down nor bottom-up. Such co-production initiatives have in the past resulted in landmark legislation like Right to Information and guaranteed Rural Employment. It needs to be noted that the near absence of mainstream trade unions from the conversations and debates on informal workers only serves to reinforce the perceptions of privileging the labour aristocracy, or only the formal sector, which is in reality, a tiny minority of the Indian workforce.

This is an ideal opportunity for the Indian state to raise its capacities to provide goods and services for the citizens who need them most. Rather than continue to ignore the problem of informal labour or simply pretend it does not exist, the time has clearly now come for the state to don the role of a provider rather than just act as an enforcer.

P.K. Anand is a Research Associate at the Institute of Chinese Studies, Delhi.

This article is part of an occasional series commissioned by CLB designed to examine the influence of Chinese capital around the world and foster worker solidarity in the global south.