For more than a week now, 32-year-old Chen Jing and a group of dedicated caterers and delivery drivers have been working around the clock to provide free meals to medical staff in Wuhan.

Working out of their base at Hankou railway station, the workers have cooked and delivered more than a thousand meals a day to overworked medical staff in five city hospitals, knowing full well that they are potentially putting themselves at risk of contracting the disease in the process.

Chen had planned to return to her hometown in Shaanxi for the Lunar New Year holiday but, like millions of others, she was trapped when the city was quarantined on 23 January. Initially, Chen did not know what to do but, working with food delivery company Meituan, she soon organised an efficient and hygienic delivery system that was able to provide medical workers with much needed meals.

The efforts of Chen and her colleagues is a testament to the fact that the novel coronavirus outbreak has not just affected the city’s frontline medical staff but has also placed extraordinary demands on Wuhan’s delivery workers, taxi drivers, sanitation and community workers, not to mention the thousands of construction workers contracted to build a new hospital in just a few days. These workers are under additional pressure however because the bulk of resources go to frontline medical staff, leaving support staff largely unprotected. 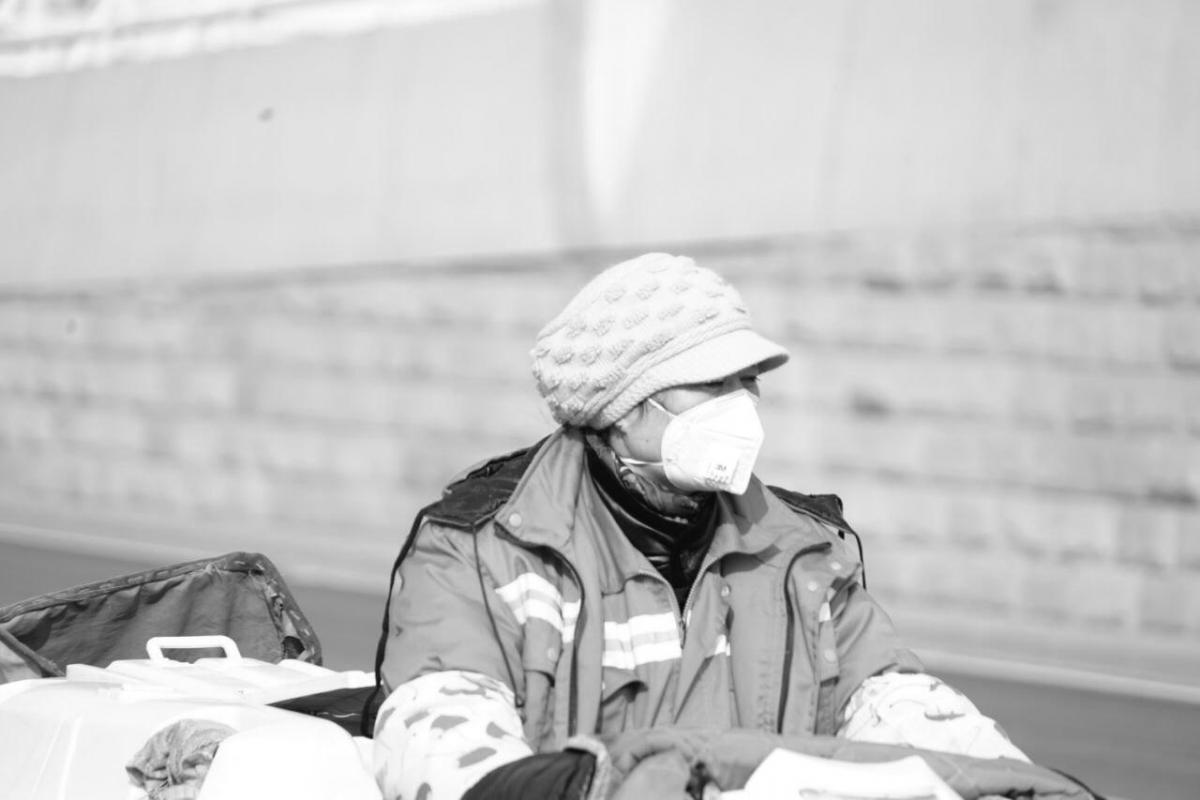 Wuhan’s sanitation workers are struggling to keep the city’s streets clean with increased workloads and limited supplies. Even at the best of times, sanitation workers are under pressure to complete as much work as possible in the shortest time but now in Wuhan, their workload has increased immeasurably. In addition to their usual cleaning services, sanitation workers have to empty mask recycling bins, sterilise their vehicles three times a day and spray disinfectant onto the streets. Despite the increased burden and obvious risks, most sanitation workers cannot afford not to work. Ms Lian, who is in her mid-60s, is paid 70 yuan a day but explained that she will be fined 150 yuan for each day’s absence.

Masks, gloves and disinfectant are all in short supply. One group of workers received disinfectant daily and reusable labour gloves from their employer, others were allocated just two masks by their employer. In Beijing and Guangzhou, where supplies are more plentiful, the majority of sanitation workers still have to use disposable masks for more than one day, according to surveys conducted in those cities. In Wuhan, the situation is even more critical.

In addition, the lack of public transportation means that many workers have trouble just getting to work. One sanitation worker, Ms Wu, said she had to walk for more than an hour to get to her cleaning station. She only had seven masks, she said, provided by the sub-district authorities not the private company she is employed by.

The transport shutdown has also immeasurably increased the pressure on the city’s already under-resourced community workers. Thousands of elderly residents in the city have been unable to get to a hospital and have to be cared for in the community. The city’s community workers have been tasked with monitoring the health of local residents and making sure those who cannot leave home have adequate supplies of food, medicine and other necessities. Many community secretaries in Wuhan like Xu Qing receive more than one hundred phone calls from residents every day and have to work until midnight to keep up with demand.

However, the majority of community workers are ill-equipped to deal with the crisis. They were not given accurate information about the nature of the virus and only had the most basic protective gear. One community worker told Caixin that she only had disposable masks that she had to reuse after spraying with alcohol. Standing next to heavily protected medical staff from the hospitals, she said, she felt naked. Moreover, she feared even her station’s meagre supply of masks would soon be used up.

With the closure of the city’s subway, bus services and ferries on 23 January, taxi, ride app drivers and delivery workers are now playing an essential role in keeping the city moving. Thousands of taxi drivers help transport people to and from hospital: not just suspected coronavirus cases but pregnant women, patients under dialysis etc. They also help keep local communities supplied with daily necessities buying food and medicine for those who cannot go out.

Taxi driver Yu Huahui told GQ Report that his company only provided drivers with surgical masks and disinfectant. However, concerned for the safety of passengers and himself, he bought additional gloves, disposable raincoats and medical supplies for himself and his colleagues. “I have a few hundred N95 masks that I can give to company employees.” Yu urged his employer to do more to protect drivers and passengers but received no response.

Although food delivery rates on some platforms have increased since the lockdown, most delivery workers are still reluctant to take orders going to hospitals because they lack adequate protection. One food delivery platform in Wuhan allocated a maximum of just five masks per person but required all riders to wear masks during the work and to inform the company if they felt unwell. JD.com on the other hand does provide delivery workers with a new mask every day - sometimes it is a surgical mask, and sometimes a N95 mask. It was quite a high level of protection compared to other delivery platforms, one courier said.

It is clear that private companies, as well as the local government, could and should be doing a lot more to help the workers in Wuhan who are now playing such a vital role in keeping the city functioning. Here, local trade unions can play a greater role as well, putting pressure on employers to properly protect employees.