A Hong Kong-owned electronics company in Shenzhen employed more than 70 underage workers, forcing them to work 12 hours every day for a fixed monthly salary of just 2,000 yuan, the Southern Metropolis Daily reported on 27 December.

All the child workers were from the Yi minority in the remote mountainous region of Liangshan, Sichuan, which has been the source of several child-labour trafficking cases over the last decade or so.

In this latest case, Shenzhen Click Technology reportedly recruited more than half of a group of around 130 children who were trafficked from their villages in Liangshan after the Yi New Year in November. Most of the child workers were girls, because, as one worker told the newspaper, they are “easier to manage.”

Another source told the newspaper that Click Technology usually employed 13- and 14-year-olds and that many of them stayed at the company for two to three years. “But this time,” the source said, “the kids are as young as 12-years-old, some even appear to be under ten.”

The girls initially claimed to be over the legal minimum working age of 16 but later admitted that: “We all came here when we finished the fifth or sixth grade. Most of us are around 12-years-old.” 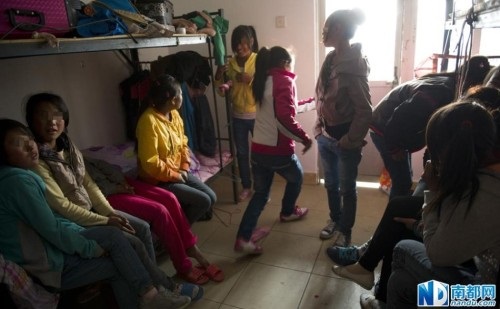 The girls lived in cramped eight-bed dormitories and bought their lunch from a food vender across the street. The average shift at the factory was 12 hours: “It is very fast-paced on the assembly line, it is a very tiring job,” one girl said.

Meanwhile, the human resources manager at the company and the middleman, who brought the girls on a two-day train ride from Liangshan to Shenzhen, reportedly received a commission of 10,000 yuan per month for the overtime work done by the children.

After discovering the use of child labour at the factory, the newspaper phoned the local labour authority which investigated and announced that it was “highly likely that the factory was using illegal child labour.” The newspaper reported that the company was trying to hide the girls from the inspectors during their visit.

In 2008, at least 167 trafficked child workers in Dongguan were rescued by the local authorities and sent back to Liangshan. Then in 2011, the media exposed another story of 21 adolescents who had been trafficked from Liangshan and sold to an electronics factory in Shenzhen’s Longgang district. The details of how the children were trafficked and the conditions they worked under were almost identical. And in 2012, the China Daily reported that a factory in Suzhou had employed more than ten child workers all of whom were from the Yi minority in Sichuan. As far as CLB is aware, no arrests have ever been made in these cases.