After more than a year of protests by cab drivers across China against unfair competition from drivers using ride-hailing apps, the Transport Ministry in Beijing has issued a directive on reform of the taxi industry that is designed to allow traditional and app-based car services to co-exist peacefully.

The 10 October directive however left many drivers and commentators unimpressed. Chen Chunxiu, one of a group of 50 taxi drivers from Xiangtan, Hunan, who are trying to set up their own independently-operated cab company said:

This long-awaited document has no substance. The core question of ownership remains unanswered! It is pointless to say that the drivers should negotiate with the taxi companies. If we could negotiate effectively, there would not be so many protests by drivers all across the country this year.

CLB’s Strike Map recorded 198 protests by transport workers in the first nine months of this, the vast majority of which involved taxi drivers. And the protests have continued unabated this month.

On 13 October, three days after the Ministry’s directive, at least five drivers for Didi, the most popular taxi-hailing app in China, were ambushed and attacked by as many as 100 taxi drivers in the city of Heyuan in Guangdong, the Yangcheng Evening News reported on Thursday.

One Didi driver described how he was tricked by a taxi driver who pretended to be a customer into an ambush near a local police station where other angry taxi drivers awaited. He tried to seek refuge in a drug store but was dragged out and beaten. Police detained 11 taxi drivers but later announced that app-based taxi services were still illegal in the city.

At the same time, several “taxi driver representatives” from both camps sat down with the local transport authority in Guangzhou to discuss the proposed reforms. See photo below. According to the Southern Metropolis Daily, all of the 19 representatives supported the government’s proposal but none of them discussed the key issues of how to regulate the app-based companies and whether the excessive rental fees for traditional taxi drivers should be lowered or eliminated. 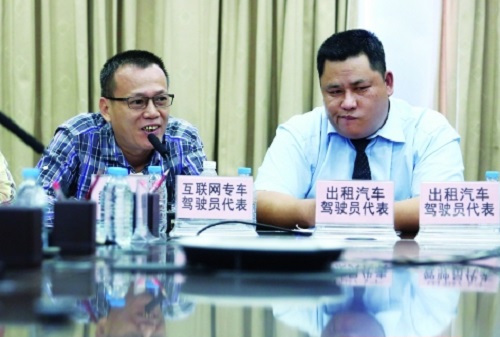 Writing on his microblog, Liu Xiaogang, the former vice president of the Guangzhou Federation of Trade Unions, cast doubt on the legitimacy and effectiveness of the meeting: “How are these representatives elected? Can they really represent the majority of drivers? The meeting would be much more effective if the taxi drivers’ trade union could vote on who attends,” he said.