Courts in the north-eastern province of Jilin have sentenced seven company bosses and eleven local officials to at most nine years in jail for their part in China’s worst factory fire in recent history, state media reported on 27 December.

The fire at Baoyuanfeng Poultry Co. killed 121 workers and injured another 76 in June 2013 when an electrical short circuit ignited combustible material inside the factory and set off a series of explosions in the plant’s ammonia pipelines. Nearly 400 people were working at the time and many were trapped inside because the factory’s exits had been locked. None of the workers had been given any fire safety training.

Baoyuanfeng’s chairman, Jia Yushan, was given the harshest sentence, nine years in prison and a one million yuan fine, for “failing to ensure a safe working environment.” Other managers at construction and engineering companies associated with operations at the factory were sentenced to between three and seven years in jail.

In a separate court hearing, the local fire chief Lü Yandong and his deputy Liu Guicai were sentenced to five and half and five years’ imprisonment respectively. Other health and safety officials and local police were sentenced to between three and five years in prison. It was obvious soon after the accident that local officials had failed to ensure the factory complied with even the most rudimentary of safety measures. 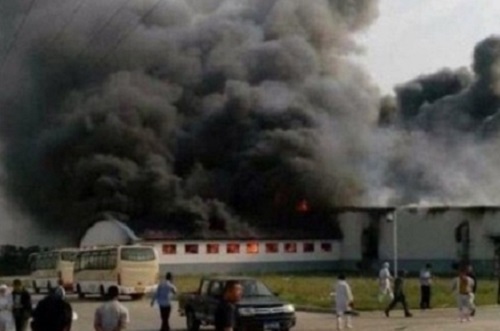 Most of the fines handed out in this case were between just 200,000 and 300,000 yuan. However, they could have been considerably higher had the recently revised Work Safety Law (安全生产法) been in force at the time of the accident. Under the revised law, which went into effect on 1 December 2014, fines for exceptionally tragic accidents like that at Baoyuanfeng should range from ten to 20 million yuan. It will be instructive to see just how rigorously China’s courts enforce the revised law in the event of similar tragedies in the future.

In another legal development, Baker & McKenzie’s China Employment Law Update reports that on 13 November, the State Administration of Work Safety issued new Regulations on the Administration of Occupational Hazard Notifications and Warning Signs, which obligate employers to clearly notify employees of occupational hazards and set up warning signs at workplaces.