A 22-day strike by nearly 5,000 workers at a Shenzhen factory run by Dutch semiconductor giant ASM ended last week with an agreement to increase wages and subsidies by 20 percent. The company also agreed to hold regular talks with the workers on how to improve the company’s rules and regulations. 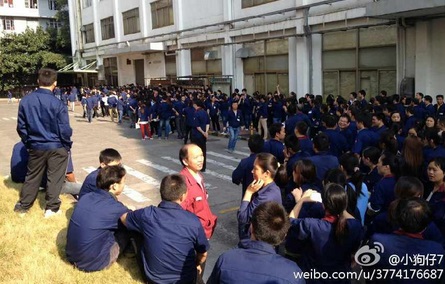 The strike broke out on 31 October when ASM Materials China Limited announced, without the trade union’s consent, that it would move part of the factory to a location outside Shenzhen. Thousands of workers walked off the job, held up banners and started to march through the factory, demanding a pay increase of 3,000 yuan per month as well as compensation for relocation.

Workers complained that pay at the factory had remained stagnant for many years. One worker representative, Mr. Gong, told Phoenix TV during the protest that the company would always claw back any gains made by employees when the minimum wage in Shenzhen was increased.  For example, he said: “We used to have a 1,000 yuan basic salary plus 500 yuan in subsidies, but after the minimum wage was raised to 1,200 yuan, the company raised the basic salary accordingly, but slashed the subsidy by 200 yuan.”

The media coverage of the dispute generated solidarity across the border in Hong Kong. Members of the Hong Kong Confederation of Trade Unions protested at ASM’s Hong Kong headquarters on 6 November and demanded the company address the workers’ grievances. Workers also shared their experiences on Chinese social media and discussed strategies using online messaging platforms. A Shenzhen-based labour rights group also provided organizational advice and support to the striking workers.

On 20 November, ASM finally agreed to increase both the basic salary and subsidies by 20 percent for those employees who agreed to relocate with the company and give out a severance package, according to the law, to those who preferred not to relocate. It also promised to provide an additional housing allowance of 200 yuan or free accommodation at the factory, as well as to open better communication channels between workers and management.

Although the deal fell short of the workers’ initial expectations, many saw it as a small victory. “The strike and protest not only got us a pay raise of 20 percent, more importantly, it also showed the workers how to defend their rights,” one worker wrote on a labour activist’s blog.

Moreover, the worker’s solidarity continues after the strike as they plan to donate money to seven workers’ representatives who were illegally sacked after most employees signed the settlement agreement and went back to work.