An International Labour Organisation (ILO) Committee has requested the Chinese government to ensure previously arrested and sentenced labour activists in Guangdong “can continue to provide advisory services to workers without hindrance”. The request was made in an interim report released by the ILO’s Committee on Freedom of Association (CFA) on 9 November 2016. 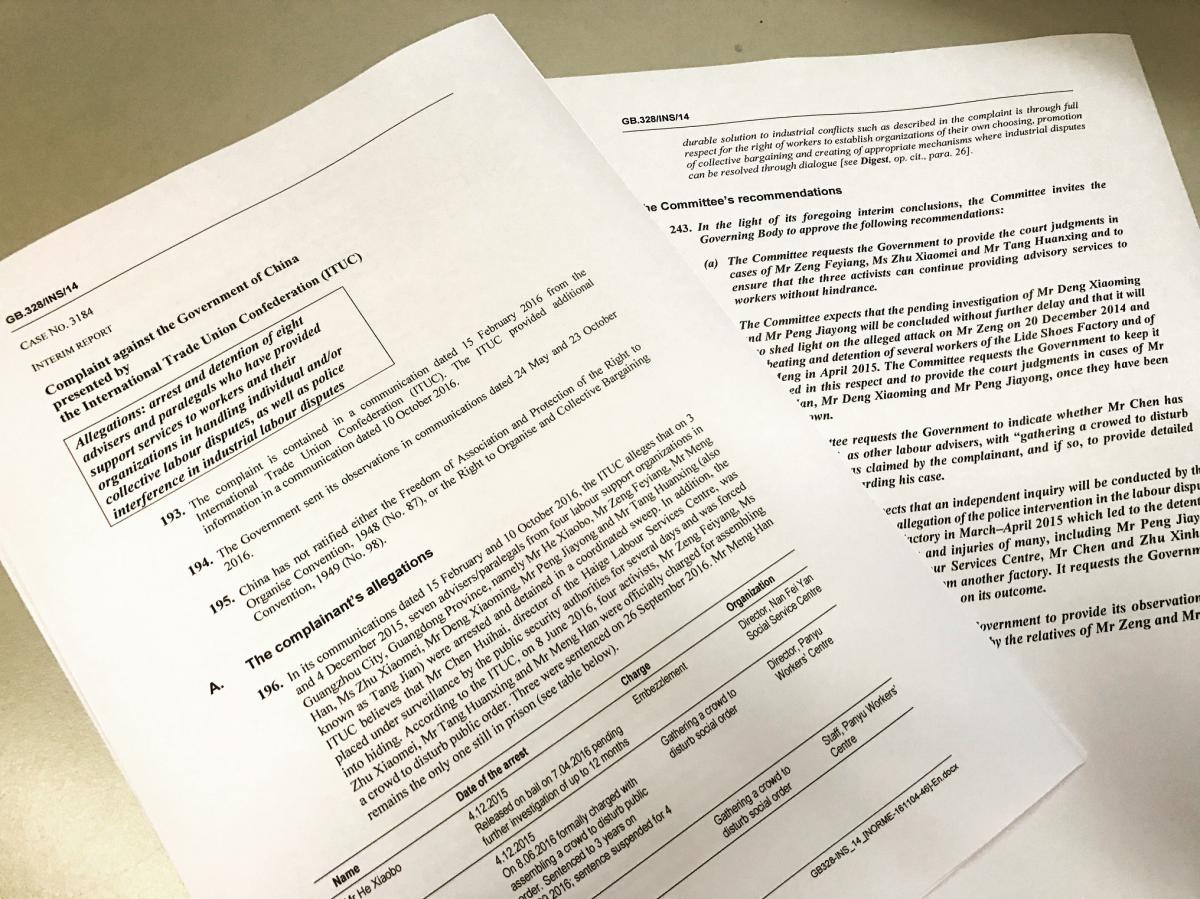 In its report, the CFA notes the detention of Zeng Feiyang, Zhu Xiaomei, and Tang Huangxing on 4 December 2015. All three were subsequently charged with ‘gathering a crowd to disrupt social order’. They worked at Guangzhou-based Panyu Workers’ Centre that had provided assistance to workers engaged in collective bargaining in a number of cases including the Lide shoe factory dispute over compensation for relocation.

The interim report states that the activists “appear to have been arrested, detained and charged for being involved in a labour dispute and considers that the detentions of persons connected with their activities in defense of the interest of workers constitutes a serious interference with civil liberties in general and with trade union rights in particular.”

The ILO Committee further requested that the Chinese government provide court judgements of the three activists. Their colleague Meng Han was sentenced to 21 months in prison earlier this month for the same offence. The interim report states that it expects the pending investigation of two more labour activists, Deng Xiaoming and Peng Jiayong, to be closed without delay, and requests the Chinese government to clarify whether Chen Huihai has also been charged with “gathering a crowd to disturb public order”.

This ILO interim report relates to a complaint filed by the International Trade Union Confederation (ITUC) against the Chinese government on 15 February 2016 following the detention of over 50 labour activists in a coordinated police action in Guangdong province during the first week of December 2015. Seven were criminally detained, and four were later charged and sentenced. Meng Han and Zeng Feiyang each spent over ten months in the Guangzhou No.1 Detention Centre before going to their trial.

The Chinese government responded to the ITUC complaint separately in May and October 2016. However, the CFA has stated that the government’s documentation fails to provide sufficiently detailed information on the labour disputes described in the ITUC complaint and on roles and activities of the detained activists.