The continued slowdown in China’s manufacturing heartland has led to a marked increase in worker protests as factories close down and bosses run off without paying their employees’ wages. 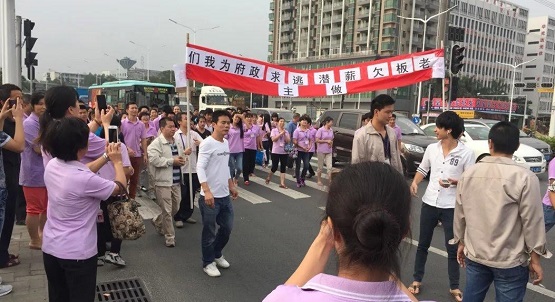 200 workers at a paper products factory in Shenzhen demand payment of two months’ wages in arrears.

China Labour Bulletin’s Strike Map recorded 301 incidents in November, the highest monthly total this year, exceeding even that of January, the month immediately prior to the Chinese New Year when protests often reach their peak.

A major focus of worker unrest was in the traditional manufacturing centre of Guangdong, which saw a record 56 strikes last month, more than double the number in any other province.

The number of strikes and protests in Guangdong has more than doubled in the last few months, increasing from 23 incidents in July to 52 in October and 56 in November. See table below. 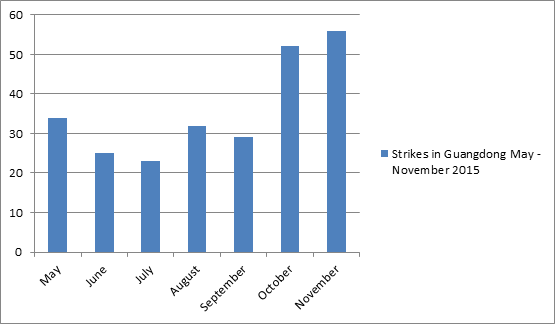 The vast majority of the Guangdong incidents occurred in the manufacturing sector with workers demanding payment of wages in arrears etc. after factory closures, mergers and relocations. In many of these cases, workers marched on local government buildings to demand restitution after the boss vanished.

Police were deployed in nearly half of the 75 factory worker protests in Guangdong over the last two months and arrests were made in nine cases.

In China as a whole, however, manufacturing accounted for less than a third of the worker protests logged on the strike map in November - 91 incidents in total. The construction industry was the most active sector with 133 incidents last month, spread out over the entire country. All of the construction worker protests concerned the non-payment of wages.

The number of construction worker wage arrears protests more than doubled in November compared with the previous month of October, suggesting that workers are already starting to demand payment of wages in preparation for the upcoming Chinese New Year next February.

Protests in the transport industry, mainly by taxi drivers concerned at illegal competition from drivers using ride-hailing apps etc., remained at a comparatively low level, accounting for about seven percent of all incidents in November.

The number of protests in the mining industry however continues to rise, with 15 incidents this month, nearly all related to wage arrears as the coal industry continues to decline and employees are laid off in huge numbers.