Yu Wucang: The sanitation worker who refused to back down

For the last decade, Yu Wucang has swept the streets around Beijing Road in downtown Guangzhou. He is best known however as a tireless campaigner for better pay and working conditions for his fellow sanitation workers.

He has focused mainly on the unfair wage system his own district of Yuexiu but, last year, he also provided invaluable support and advice to the sanitation workers in the University Town district of Guangzhou as they sought to get compensation from their old employer and a better deal from their new employer.

Yu never sought the spotlight for himself but now he has become the centre of his own campaign after he was sacked at the end of last year. Yu’s response to his dismissal was both combative and creative: He picked up his brooms and went to work on Beijing Road as usual; refusing to accept that he had been fired at all. See photo below. 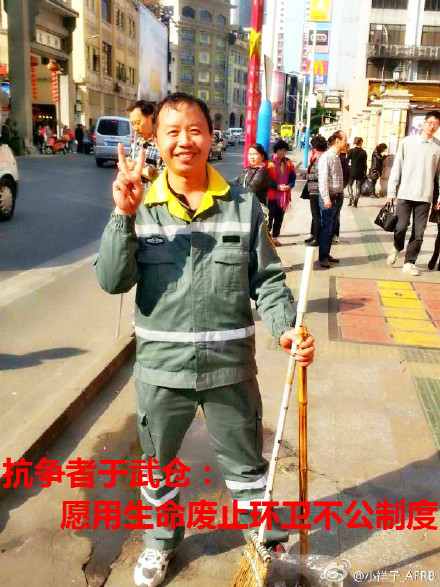 Yu’s action quickly drew attention on social media and he was profiled in an article by Hong Mengxia, published on ngocn.net on 14 January 2014. A translated and edited version of the article follows.

A sober and optimistic activist: The story of Yu Wucang, a sanitation worker fighting for the rights of his colleagues

When Yu Wucang was informed at the end of last year that his employment contract would not be renewed, this middle-aged migrant worker from Hunan, who has been sweeping the streets of Guangzhou for 13 years, just carried on working.

On the ninth day of his one-man protest, Yu discovered that his employer had locked away his shovels and brooms. Undeterred, Yu just picked up another small broom and a nearby dustpan and carried on as usual:

"It felt good. They were too chicken to do anything openly so they just played this little trick. They are afraid I will let people know about what is going on and they will look bad,” Yu said.

What was “going on” was that Yu had been a persistent and vociferous critic of the discriminatory work system in Guangzhou’s central Yuexiu district under which street cleaners in some parts of the district earned less than others. Under the so-called "1+18 " system, workers at the main operations centre were paid more than workers at the 18 sub-districts, with more variations in salary and benefits between the various sub-districts. Yu said the income gap could be as much as 800 yuan a month.

In June 2013, Yu posted his criticisms of the system online: “The next day,” he said, “someone from the sub-district office came for a chat. They promised to look into the problem but nothing happened. Then they terminated my employment contract.”

Not only did they sack Yu without any justification, the Beijing Road Sanitation Station started to recruit new workers. Yu decided to take a stand: “If they want to play hardball, I can play hardball too!  Why should I just let them get away with it?”

It is important to note that Yu Wucang is not just some hot-headed trouble-maker. On the contrary, he is a thoughtful and compassionate advocate whose primary concern is the pay and working conditions of his fellow sanitation workers in Guangzhou. He has studied local government policies and knows exactly how much money goes to which district, the social insurance payments and overtime rates. "I just hope everybody can enjoy job security and a safe retirement.  No matter how badly I’m treated, I will still carry on.”

The main reason he decided to become an activist was because he understood that other workers might be more resigned to their fate than he was and less willing to stick their neck out. He understands that he could get into trouble but says: "I am not afraid. I am confident, and I know that what I am doing is the right thing."

Yu’s father graduated from the famous Whampoa Military Academy in Guangzhou, and he has inherited his father's military bearing and sense of duty. He feels responsible for others and wants to ensure that the country develops in a stable and harmonious manner.

We do the hardest and dirtiest jobs. But people often look down on us and we don’t get paid what we deserve. It is things like this that can lead to social unrest. We are just doing what we can. Xi Jinping's anti-corruption drive is big thing; we are just making a small contribution.

If we sanitation workers don’t get a decent wage, we won’t work hard and the streets will not be cleaned properly. And this will harm the interests of the taxpayers who ultimately pay our wages.

Although he is fully aware of the social injustice and corruption plaguing China, Yu never becomes indignant or losses perspective, he just focuses on doing the right thing.