After getting off work one evening at a Japanese-owned factory in the Pearl River Delta, a young woman walked in the Sunflower Women Workers Centre and picked up several copies of the centre’s newsletter:

“I’m going to distribute it to my sisters at the factory,” she said proudly.

The next day was 8 March, International Women’s Day, and the newsletter featured stories on the origin of Women’s Day and whether women workers in China are allowed to take the day off. Other stories included the dairy of two factory girls, a colloquial interpretation of labour law, and a training session on collective bargaining.

The Sunflower Centre was set up last year by Hong Mei, a young migrant worker from the central province of Hunan whose arm had been badly injured whilst operating a dangerously antiquated machine at a family run workshop in Guangdong. Hong Mei had to battle a long time with her boss just to get miniscule compensation. Moreover, no other factory in the area would hire her because of her disability. She knew of many other women who had suffered a similar fate and decided to set up organisation that could provide a platform for women workers to share their experiences and get training. 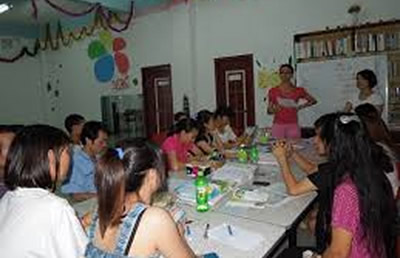 Hong Mei (right) and the staff at the Sunflower Centre

After three decades of economic reform and development, China’s factory girls are still a long way getting decent pay for decent work. Wages have gone up to some extent but many welfare benefits are still lacking.  According to a survey conducted by the National Bureau of Statistics in 2011, only a small minority of young migrant workers had access to social insurance (7.6 percent had a pension, 21.8 percent work-related injury insurance, 12.9 percent medical insurance, and 4.1 percent had unemployment insurance). Around 50 percent of them didn’t have employment contracts and they were often exposed to work hazards.

But in many ways today’s factory girls are very different from their mothers’ generation. They still have to move from the countryside to work long hours for low pay in the factories of the south but they grew up in the era of the Internet, eat at McDonalds and carry smart phones. They are proud of their identity, aware of their rights and are brave enough to take action.

Their mothers’ generation often had no choice but to endure sweatshop conditions but today’s factory girls can and do take a stand against exploitation. About 20 percent of the worker protests China Labour Bulletin recorded on our strike map this year occurred at workplaces where the majority of employees were women. Women are also among some of the most active workers posting information online about strikes and protests, and in seeking out legal assistance for problems at work.

Two of the major problems faced by young women in today’s workplace are gender discrimination and sexual harassment. Gender discrimination is widespread and widely accepted in the workplace. Employers often ask prospective female workers about their family plans or even demand they agree to illegal contract conditions, requiring them to undergo pregnancy tests or adhere to stringent conditions regarding plans for marriage and pregnancy.

A survey conducted by China’s Academy of Social Sciences in 2010 showed that 40 percent of women employed in foreign-owned enterprises or joint ventures, had been sexually harassed, and that figure rose to 70 percent in the service sector. Many victims find it difficult to speak out and for those who do take legal action, proving harassment can be an uphill struggle. Although the State Council last May included the prevention of sexual harassment in a special regulation on women workers, critics say it has not yet been effectively implemented.

Women, like their male colleagues, are finding however that some work-related issues can be solved through collective pressure. Late last year, around 600 women auxiliary workers at Yanlian Industrial in Shaanxi succeeded in pressuring the state-owned petroleum giant into abandoning a plan to reclassify them as agency workers, which would have deprived them of the job security they currently enjoyed.

Yet, according to Jia Jun, one of the founder members of the Sunflower Centre, such cases of women workers’ solidarity are still comparatively rare. She said:

Women workers often come to us individually, complaining about their situation or seeking legal advice. If they don’t see the situation change immediately, they often just quit rather than discuss these common issues with other sisters.

The focus of the Sunflower Centre is very much on collective action and solidarity. Jia Jun explained:

We try to introduce them to the concept of collective bargaining, a dynamic mechanism through which they would participate in factory management and bargain with their bosses in terms of salary and working conditions. We encourage them to think that if they don’t change things collectively, they would still face the same problems in other factories, but most of the sisters still prefer to leave in silent protest.

The labour shortage in the manufacturing sector means that is very easy for workers to seek a better job elsewhere if they are unhappy in their current position, resulting in a high worker turnover and difficulties for Sunflower’s collective bargaining effort. As Jia Jun said:

It takes us a very long time to nurture women workers’ leaders, someone who is very aware of collective rights and is comfortable talking to and persuading her sisters. But all too often they will leave the factory for skill training and the chance of a better career path.

The desire for personal advancement is one the most noticeable characteristics of young women workers today. As sociologist Wang Lie put it: “If leaving, remitting, and returning are the three key words that define the old generation, then leaving, searching, and becoming are the main themes for the new generation.”

While the Sunflower Centre works with employees to promote collective bargaining, another organisation, Business for Social Responsibility (BSR) is working with employers to encourage communication between managers and workers. One of their case studies in southern China shows that after training, managers are able to better understand women workers’ particular needs, and women workers are feel more respected by managers.

Although they have different approaches, one bottom up, the other top down, both Sunflower and BSR are striving to help young women obtain decent work and decent pay. And despite the hardships and setbacks, Jia Jun at the Sunflower Centre says they remain optimistic the situation will change for the better.