A two-day strike involving more than 1,000 workers at a Wuhan automotive components factory ended on Friday 24 August after management increased its pay offer to an extra 200 yuan a month.

Production line workers at the Youde Auto electrical components plant have now been promised a basic salary of 1,300 yuan per month, as against the 1,100 yuan minimum wage in Wuhan.

Youde, a joint venture between China’s Dongfeng Motors and the US-based Lear Corporation, initially refused to address workers’ demands for a 500 yuan per month pay increase but it gradually made more concessions as the strike progressed. The first two offers were ignored by the workers but after the third offer, in which long-serving employees got a better deal, the workers’ unity began to fray and most of the strikers agreed to return to work.

Although the pay offer was less than they were hoping for, the strike was generally considered to be a success. One worker told CLB; “If we didn’t take any action, we’d never get the pay we deserve.” 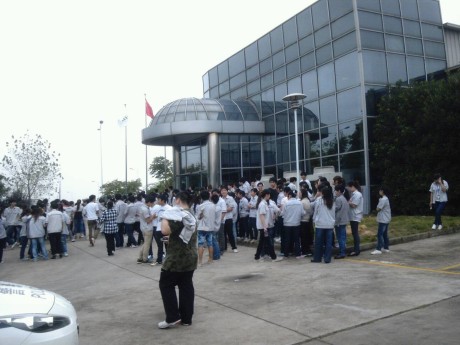 The strike began on Wednesday morning (see photo above) as workers spread the news around their dormitories that nobody should go to work. They then set up an underground QQ group to discuss strike strategies. However, few workers were willing to take a leading role in negotiations with management for fear of reprisals. Workers admitted this reluctance to stand out from the crowd hampered their ability to get a good deal.

This was believed to be the first factory-wide strike at Youde, since the business was set up in the Wuhan Economic Development Zone in 1994. There had been a few earlier small-scale protests, workers said, but none led to a pay increase.

One reason for the success this time, workers said, was the significant economic loss incurred by the company during the strike, estimated by one worker at 3.8 million yuan. One of Youde’s biggest customers, Dongfeng Peugeot Citroen, sold over 208,000 vehicles in the first half this year with sales up 7.6 percent from the same period last year. And there is still a generally positive outlook for sales in the Chinese automotive sector in the second half of the year.

There is a trade union at Youde but workers said it not represent them, even though they have to pay union dues each year. The lack of union support meant that the only way workers could press their pay claim was to go out on strike. But without democratically elected representatives to negotiate a sustainable deal on their behalf, the workers simply had to hope that management would make an acceptable offer. And there was no guarantee the promise to raise wages would actually be honoured.

The Youde strike is reminiscent of many strikes in the Pearl River Delta a few years ago. Now, that region is seeing more positive signs in terms of trade union reforms and the development of collective bargaining initiatives. This May, the Japanese-owned Ohms Electronics in Shenzhen held direct trade unions elections, and in August, the new union chairman delivered a work report, saying the trade union had set up communication channels for workers and management. Ohms’ Japanese general manager reportedly welcomed the move.