Workers and trade unions at the forefront of resistance 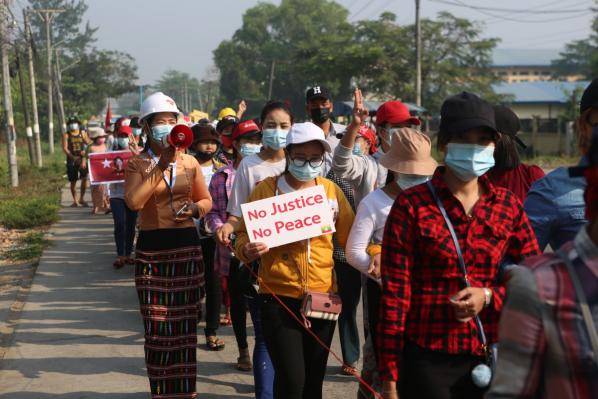 Trade unionists around the world, and particularly in the Global South, increasingly face the risk of political persecution for defending basic labour rights and political freedoms.

In Myanmar, many trade unions have been outlawed and union leaders are being targeted by the military regime in a brutal crackdown on protesters.

In our latest report from Yangon, we talk to the ordinary workers and trade unionists who have been at the forefront of the resistance and who refuse to back down. Following the outlawing of 16 trade union organisations by the military, the president of the Federation of General Workers Myanmar, Moe Sandar Myint, told CLB: “It is ridiculous for an illegitimate junta to declare us an unlawful association. We will ignore their announcement and continue the fight.”

As a labour organization with a growing international focus, China Labour Bulletin stands in solidarity with all trade unionists around the world who are facing political persecution, including those here in Hong Kong. Carol Ng, chair of Hong Kong Confederation of Trade Unions and Winnie Yu, chair of the Hospital Authority Employees Alliance, are among the 47 political and civil society activists currently facing charges of conspiracy to subvert state power, after organizing an unofficial primary election last year for the now-cancelled Legislative Council elections.

In mainland China, worker activism eased slightly over the traditional Lunar New Year holiday. However, China’s taxi drivers, who have seen incomes slashed over the last year, have never ceased in their protests over the exploitative practices of cab companies, forced upgrades to electric vehicles, and the proliferation of e-bike sharing programs.

CLB’s Strike Map recorded 35 taxi driver protests over the first two months of 2021, accounting for more than one-quarter of all the collective actions logged. In one remarkable incident, a taxi driver from the central city of Xuchang sued the local newspaper and the municipal transport authorities for 3,000 yuan each, accusing them of colluding with the city’s cab companies to extort management fees from drivers.

Representing himself during a court hearing on 25 January, the driver, surnamed Chang, claimed that the Xuchang Daily had falsely reported that he was operating an unlicensed taxi and had refused to retract the story. Chang claimed that the report was part of an intimidation campaign to force drivers to pay the management fees demanded by the cab companies.

Chang told the court that other colleagues had also been exposed by the newspaper and then received calls from the cab company manager saying, “Did you see the newspaper report? You better pay up.”

As China begins its annual National People’s Congress legislative session today in Beijing, it is imperative that the Party and government refrain from self-congratulatory rhetoric and listen to voices of ordinary people like Mr Chang who know what is really going on in the country.