There has been a noticeable surge in the number of strikes and worker protests in China since the Lunar New Year Holiday in early February. China Labour Bulletin recorded 119 incidents on our strike map in March alone. Overall, there were 202 incidents in the first quarter of 2014, up 31 percent compared with same period last year. This increase might partly be explained by greater social media coverage but there does seem to be a pronounced increase in activism on the ground.

Although the media coverage of recent worker activism in China has been dominated by several high-profile disputes involving multi-nationals such as Walmart (see photo below) and IBM, the workers’ movement continues to be broad-based, with protests in a wide range of industries across the whole of the country. 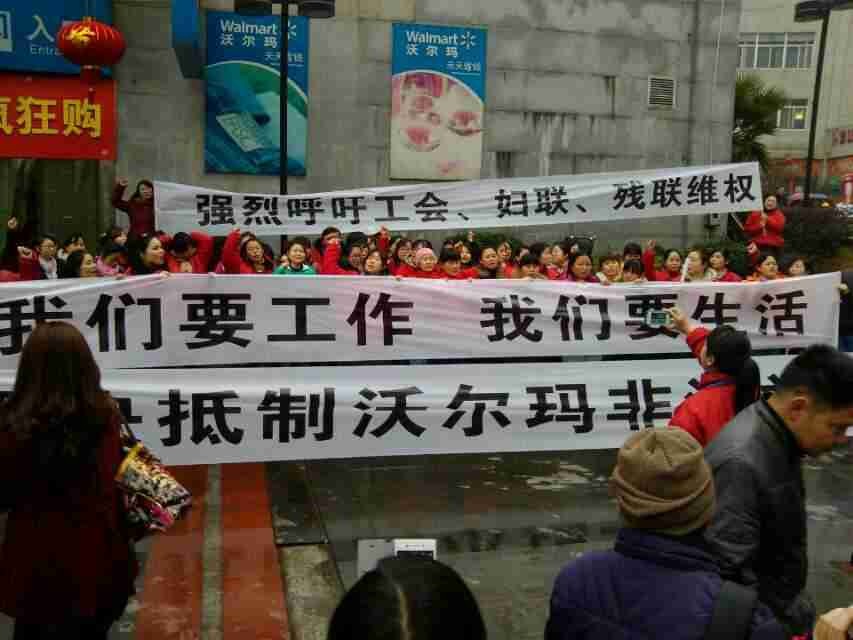 Manufacturing industries continue to be the main source of labour disputes, accounting for 35 percent of all strikes and protests during the first quarter. About one third of the strikes in the manufacturing sector were related to wage arrears and another quarter of them to demands for compensation, suggesting that many factories are still in the process of closing down or relocating without giving workers a fair deal. Strikes in which factory workers demanded pay increases were relatively rare during the quarter, representing less than ten percent of the total.

There were 54 strikes in the transport sector in the first quarter, mainly led by taxi and bus drivers, about 26 percent of the total. And as the protests at three Walmart stores faced with closure show, employees in the retail and service sectors can be just as determined as factory and transport workers. For example, there were 15 strikes by teachers during the first quarter and 13 protests by hospital workers.

The unusually high number of hospital worker protests follows a series of violent attacks on doctors and nurses, some of which have been fatal.  However, the complaints of healthcare workers largely stem from long hours, low pay and intense work pressure, as well as the unreasonable expectations of many patients. Healthcare workers point to the commercially driven structure of the industry as well as the lack of an effective trade union as fundamental problems that need to be addressed.

Geographically, strikes in the manufacturing sector are still concentrated in the south-eastern coastal provinces, with Guangdong accounting for about 55 percent of all factory strikes in the first quarter of 2014. Strikes in the transport and service sectors on the other hand are much more widely and evenly distributed across the whole of China. There were transport strikes, for example, as far afield as Xinjiang, Heilongjiang and Hainan.

The data also suggests that the increased worker activism across China has brought a more forceful response from the local authorities. Continuing the trend identified in CLB’s most recent research report on the workers’ movement, there has been a noticeable increase in both police involvement in and arrests stemming from worker protests. During the first quarter of 2014, police were present in 45 percent of all disputes, up from just 11 percent in the same quarter last year. In addition, the number of times arrests were made increased from three percent in the first quarter of last year to 18 percent this year.

The first quarter of this year also saw two high profile criminal trials involving worker activists. Wu Guijun was tried in two separate hearings on charges of disrupting public transport after leading protests by hundreds of workers angry at the refusal of their employer to discuss compensation for the closure and relocation of the factory. And in February, 12 security guards from a Guangzhou hospital were tried on public order offences after staging a rooftop protest last September in a long-running dispute with management.

Workers also took their own legal action against employers. A total of 70 workers, who were sacked from Nokia in Dongguan during a strike last year, filed an arbitration claim in February demanding reinstatement. Another worker, Zhu Xiaomei, also went to arbitration in early April when she was sacked by Hitachi after demanding the establishment of a democratic trade union. There has been no decision in either case so far.