The number of work-related accidents and deaths in China fell by 20.3 percent and 18.5 percent respectively in the first nine months of this year compared with the same period last year, the Ministry of Emergency Management (MEM) announced this month.

While the trend is encouraging, there is still a long way to go in improving work safety in China. Accidents and deaths are still commonplace, and the government still seems more focused on managing disasters than tackling more mundane health and safety issues.

In the last few days, for example, there were three separate work accidents in southwest and western China that led to at least 22 deaths.

Six miners died and another was injured on 26 October when the roof collapsed at a coal mine in Luzhou, run by the South Sichuan Coal Industry Guxu Coal and Power Co. The following day, an explosion at an oil production plant testing facility in Yanchang county in Shaanxi led to eight deaths and five injuries. And on 28 October, a construction site collapse at a car park in Guiyang resulted in another eight construction worker deaths, with two workers suffering serious injuries.

The construction sector, which employs up to 50 million workers, is still by far the most dangerous industry in China. Of the 507 incidents recorded on CLB’s Work Accident Map so far this year, 34 percent were in the construction industry, with the vast majority of them involving some kind of structural collapse or mechanical failure.

Another eight percent of accidents involved repair and maintenance work, typically where workers were under-prepared, unfamiliar with the work environment, or not properly trained or protected for the task in hand. 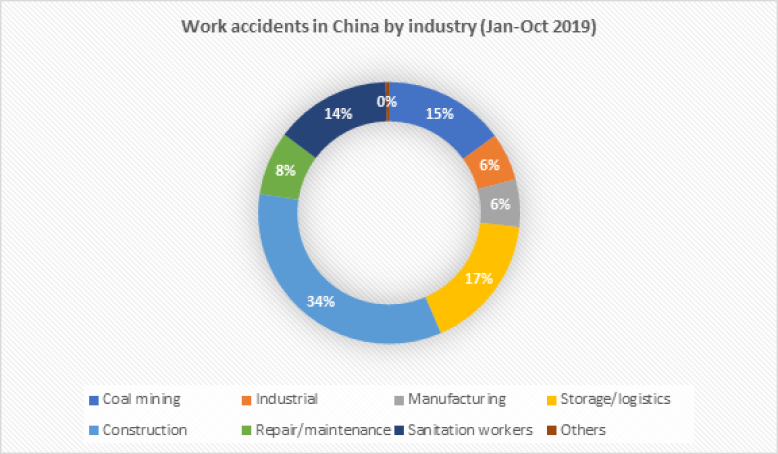 Traffic accidents are another major contributor to work-related deaths and injuries in China, and numbers have been rising as the country urbanises at an increasingly fast pace. Among the 83 accidents in the storage and logistics sector, there were 60 traffic accidents involving food delivery workers. Likewise, there were 67 cases of sanitation workers being hit by motor vehicles whilst working on the city streets.

Coal mine safety in China has improved considerably over the last two decades, and death rates reached a new low of 333 in 2018, the first year China recorded fewer than 0.1 deaths per million tons of coal produced. There has only been one accident this year involving more than ten deaths. However, relatively minor accidents still occur on a regular basis, mostly away from the larger, better regulated mines of Shanxi and Inner Mongolia.

The MEM also called for increased inspections in at risk industries however the ministry has little real enforcement power, and it has been demonstrated on numerous occasions that inspections and rectification orders can be blatantly ignored by business owners and managers who continue to implement unsafe work practices regardless.