In a landmark judgement against a state-owned enterprise, a court in Beijing ruled on 2 November that the city’s postal service had discriminated against a job applicant simply because she was a woman.

The plaintiff, 25-year-old Ma Hu, had sought 57,570 yuan in compensation and a formal apology from the Beijing Postal Service. However the court rejected her demand for an apology and only awarded her 2,000 yuan in token compensation, the same amount as awarded in China’s first successful gender discrimination lawsuit in November last year.

Ma argued that the 2,000 yuan award showed that the courts in China did not take gender discrimination seriously and stated that she plans to appeal the ruling.

Ma said the victory was unexpected: “From the outset, I never expected to win. Beijing Postal Service is a state-owned enterprise and I am just one young woman from the countryside, newly arrived in Beijing. That said; the respondent’s position was indefensible so the ruling is understandable.” 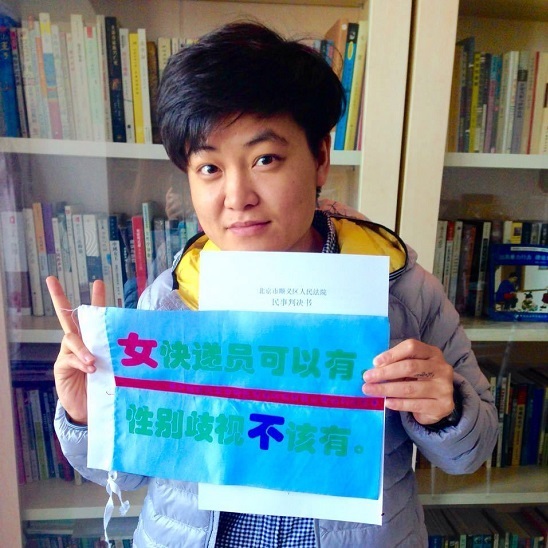 Ma Hu holds up a slogan: “Women can be couriers, don’t discriminate against us” (女快递员可以有，性别歧视不该有)

On 24 September 2014, Ma applied for a job as a courier with the Beijing Postal Service.  The recruitment advertisement stated that only men aged between 18 and 45 could apply. Nevertheless, Ma was given a two day try out and was told by her supervisor that she could sign an employment contract after completing a medical exam.

Ma waited for nearly three weeks before being told that headquarters had not approved her application because they did not hire women as frontline operatives.

With the help of a public interest law firm, on 26 January 2015, Ma filed a formal complaint with the Shunyi District Court accusing the Beijing Postal Service of gender discrimination. The following day the court called Ma to say her case had been accepted.

The case was heard two months later on 30 March. During the second hearing on 20 April, the respondent refused to accept any blame saying: “The postal service does not have women couriers. Recruiting women couriers is illegal.” The postal service claimed it was not possible for women to carry heavy packages, and as such it could not hire them.

After a third hearing in September, Ma received the court judgement in her favour on 2 November.