What next for the workers laid off from Hong Kong’s Apple Daily?

More than a thousand workers lost their jobs with the closure of Hong Kong’s popular Apple Daily newspaper and Next Magazine on 23 June this year. Many former employees have still not received their salaries from parent company Next Digital and are struggling to find new employment.

The Hong Kong Journalists Association (HKJA) and former officials from the Next Media Trade Union are trying to help, but there is a limit to what they can achieve given that the company has no management to negotiate with.

A former Apple Daily reporter, Mr A, told China Labour Bulletin that “since the company ceased operations, there has been no point of contact for staff in many departments. Everything is now word of mouth, and there are no formal channels of communication. Many colleagues, even today, still feel at a loss.”

Even though the government’s Labour Department has reportedly set up a dedicated unit to deal with enquiries from former Next Digital staff, many issues remain unresolved.

The problems faced by laid-off employees have been compounded by the unique circumstances of Apple Daily’s closure. Numerous media organizations in Hong Kong have closed down over the years due to financial difficulties, but the Next Digital Group was in reasonably good financial health at the time of closure.

Despite a boycott by advertisers in 2014, Next Digital’s subscription service had brought in considerable revenue. The group’s financial resources reportedly exceeded HK$330 million prior to the closure. However, a sizable proportion of the group's assets was frozen as part of a national security investigation by the Hong Kong police. Subsequently, major banks in the city were unable to process financial transactions by Next Digital, including the payment of staff salaries and the severance payments mandated by law.

In July, employees were reportedly able to receive severance payments via their mandatory provident fund, which is managed by a separate company, Manulife. The payment of salaries, however, remains a problem.

“The company has the funds to pay salaries, but the government does not allow it to do so,” Mr A said. “Instead, it tells them to go to the Labour Department for help. In this way, the company becomes the fall guy. Putting aside any feelings you might have about the company, this is something that really should not happen.”

Mr A argued further that it was unreasonable to ask laid-off employees to apply to the government’s Protection of Wages on Insolvency Fund for the payment of salaries because that fund was clearly set up to help employees of bankrupt companies, something that does not apply to Next Digital. 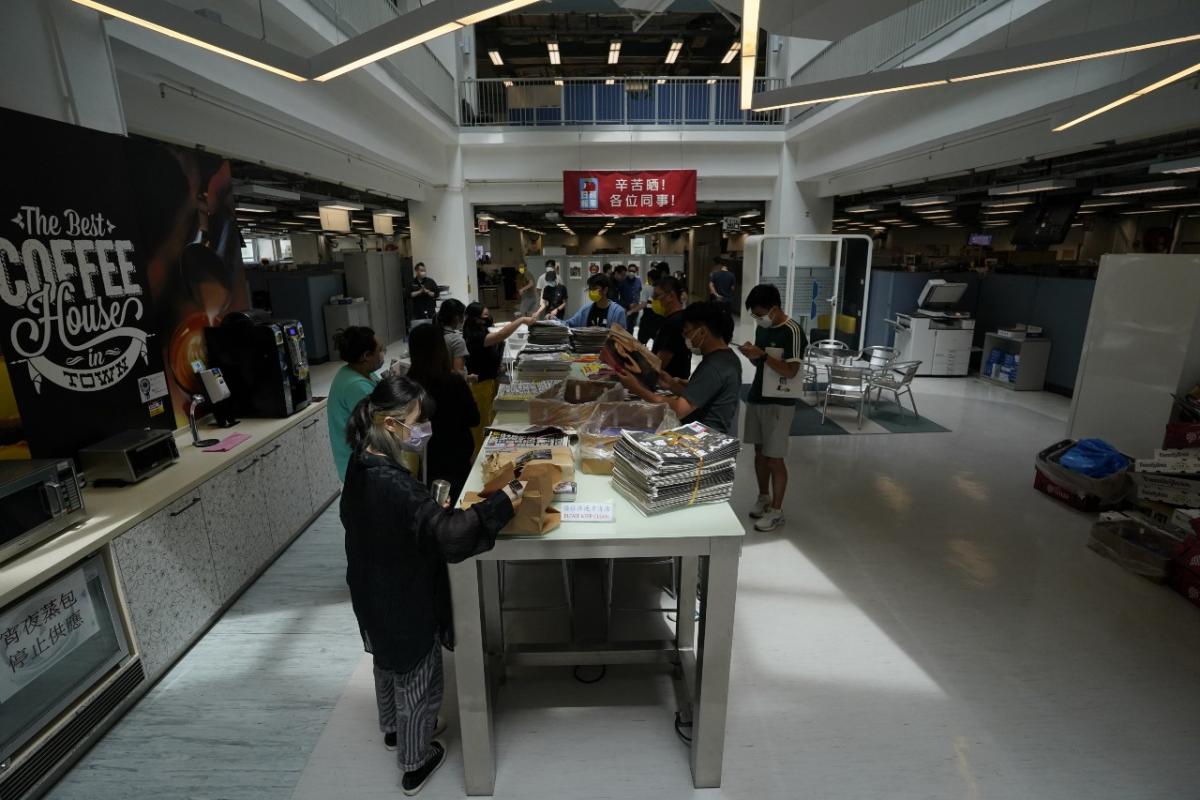 Apple Daily staff collect old copies of the newspaper and other souvenirs prior to closure. Photograph by Lee Tsz-Yu.

The day after the company announced the closure of Apple Daily and Next Magazine, the staff trade union held an emergency meeting at which it was agreed to formally dissolve the union and donate all remaining funds to the HKJA.

Some of the former union leaders set up a job search group on Facebook, allowing colleagues from various departments to share information about new job opportunities. So far, the group has listed more than 80 positions in public relations, marketing, personal assistants, civil society, technology companies, etc., but there are almost no reporting or editing jobs available.

There is little more the union can do at present. Choi Yuen-Kwei, former head of news at Apple Daily and founding member of the Next Media Trade Union, pointed out that in protecting the rights and interests of employees, the union has to deal with the employer. And, even though the employer in this case was the anti-union Jimmy Lai, the Next Media Trade Union was still able to make a difference in the workplace while it was active.

Mr Choi noted that Jimmy Lai is an advocate of the free market and sees trade unions as an enemy of the free market. “We can be pretty sure he does not like or care about the union,” Mr Choi said. But he added that Apple Daily has always been on the side of the little guy, and has always reported on working class struggles. Choi said it would be impossible for the paper to claim support for other workers’ unions while suppressing its own union. As a result, the Next Media Trade Union was successfully established without management interference.

The union was set up in 2009, in the aftermath of the global financial crisis, when Next Media management attempted to cut salaries and introduce a productivity-based salary system for reporters that was based on real estate and insurance company models. Mr Choi said the union took the lead in opposing both these measures, posting anti-wage-cut stickers on the wall as well as slogans from Lee Cheuk-Yan, the head of the Hong Kong Confederation of Trade Unions. Eventually, the company backed down and the measures were rescinded.

The union was effective in negotiating with management, but, Choi added, the current situation has nothing to do with management plans or proposals. As a result, the union is powerless to help, and the staff end up as victims.

Currently, it is the Hong Kong Journalists Association that is stepping into the void to help former staff. The HKJA has so far distributed cash vouchers (donated from local companies) valued at more than HK$100,000 to laid-off staff, and it hopes to have sufficient funds within the next two months to provide for the urgent needs of the laid-off workers and their families.

The work of the HKJA is to be commended. But as the interviewees for this article have pointed out, if Next Digital had been allowed to pay salaries and severance payments, a lot of the problems encountered by laid-off workers could have been avoided in the first place.

This article is based on a Chinese-language report by Lee Tsz-Yu, published on 6 August 2021.