What ever happened to Terry Gou’s dream of one million Foxconn robots?

Not long after the tragic suicide of more than a dozen Foxconn workers in 2010, the company’s enigmatic boss Terry Gou came up with an innovative solution to its labour woes; he would replace his downtrodden workers with robots – one million of them to be precise.

The idea was simple, let the robots do the dirty work and move the human employees up the value chain. This would make the workers happier and save the company money in the process.

This mission was supposed to be accomplished by the end of 2013. Needless to say, things did not quite work out that way.  Four years the plan was announced, Foxconn still employs more than one million people, and the vast majority of them are still doing the dull, repetitive assembly tasks the robots were supposed to be doing.

That said, the world’s largest electronics manufacturer is making some progress, just not as much as the boss had hoped for. Day Chia-Peng, general manager of Foxconn’s automation technology development committee, told the South China Morning Post last week that there were already more than 50,000 fully operational industrial robots installed in its Chinese factories, in addition to hundreds of thousands of other pieces of automated equipment. 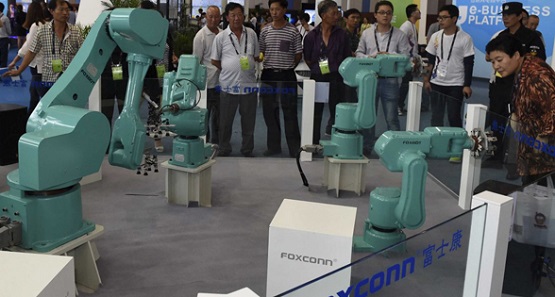 He said the company plans to add at least another 10,000 robots a year for the next five years to its facilities in China, replacing staff in the so-called “3D” jobs – positions that are dirty, dangerous and dull. The company’s much revised and much more realistic target is now to achieve 30 percent automation in its Chinese factories by 2020.

Foxconn’s (or rather Terry Gou’s) chastening experience should make it clear to others seeking to cut labour costs that industrial robots are not a panacea. The number of industries where robots are actually cost-effective remains limited, and there are still many assembly tasks they cannot perform as well as a human being.

Automation is certainly on the rise in China, and the country is investing heavily in robotics. But for the next few years at least, there will still be a lot of dirty, dull and dangerous jobs that need to be done by actual people. The responsibility of the employer therefore should be to ensure that the employees doing those jobs are adequately compensated for their work and well-protected from the dangers they face. That means protecting miners and construction workers from dust inhalation, protecting street sweepers from traffic accidents, and protecting factory workers from fires, explosions and building collapses.

Put very simply, businesses should stop fixating on robots and start valuing the human workers in their employ.