Van drivers working for Hong Kong-owned intercity logistics company Lalamove have staged protests in at least five cities in the last two weeks over pay cuts that were announced unilaterally and without warning.

On 6 May, a long row of at least 50 vans moved slowly in the centre lane of an avenue in the southern city of Shenzhen carrying banners on the sides protesting “unilateral pay cuts” by Lalamove (or Huolala as it’s known in mainland China).

Similar protests against the company occured in Changsha where drivers called on  colleagues to stop taking orders and “take a rest on Labour Day” at the end of April. In Chengdu, Lalamove drivers presented their collective grievances against pay cuts to the local headquarters of the company, getting the attention of a local television station. In Kunming a similar scenario occurred, in a local news segment a few dozen drivers were shown talking to company representatives at the offices of the logistics company. While in Xi’an a group of drivers were seen holding banners with messages like “Lalamove destroys market rules, get out of Xi’an!” 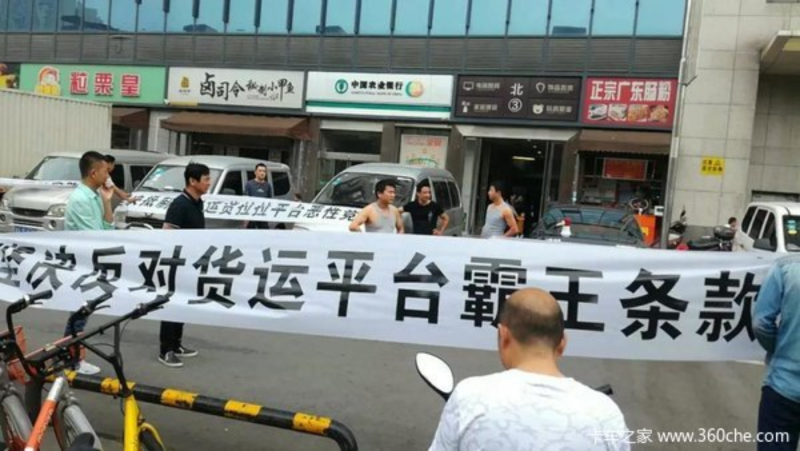 Drivers were reacting to a fare cut implemented by Lalamove without prior notice. “We did not get any heads up, we got up in the morning and went to work, then we realised our fees had been cut overnight,” Mr. Ma, a Lalamove driver, complained in an interview on Yunnan television.

The company used to pay the drivers a 38 yuan minimum initial fee per delivery, then cut it to 30 yuan, and the last straw was a reduction to 28 yuan per initial fee and an additional 0.2 yuan cut per kilometre from 3 yuan to 2.8 yuan. “With these constant pay cuts we are left with no profit margin anymore, what are we even working for?” asked a colleague of Mr Ma. Drivers also pointed out that they had to cover for increasing fuel costs while getting paid less per trip.

Individual drivers have to pay Lalamove around 700 yuan as an initial deposit and a monthly membership fee of between 199 yuan to 399 yuan to be part of the network of intercity vans. They also have to pay for maintenance fees and fuel out of their own pockets, since they are the owners of the vehicles in the first place.

Online reservation and distribution services like Lalamove have edged out traditional logistic business models in China, and drivers know that “the era of distributing name cards hoping for business is over.”

One post in a Changsha drivers forum pointed out that “customers got used to getting a van at their door immediately via their mobile apps, the Internet has provided drivers with a better platform to deliver their service, everyone should benefit from this!”  However, it continues, “drivers have accepted unilateral company policies long enough.”

In closed groups on social media platforms like MaiMai and QQ workers discussed their plans and demands in detail. Local groups came up with their own fee increase structure proposals, according to vehicle size and subsidies for carrying the Lalamove logo, which in some cases, argued the drivers, got them into trouble with traffic police for unauthorised alteration of motor vehicles.

Drivers also noted that the Lalamove app interface was prone to causing disputes with clients as they were encouraged to take orders sometimes without learning in advance the special requests they were asked to perform, like carrying heavy goods and completing orders within a specific time. With regards to unilateral pay cuts, drivers were keen to point out that the company was in violation of its contractual obligation to communicate with drivers before any important policy change.

Drivers displayed exemplary self-discipline during their collective action across different cities, in all cases they were eager to present their demands to company representatives and engage in negotiations to come up with a resolution, they were also aware of the importance local governments attach the maintenance of social stability, urging colleagues to maintain calm during the strike.