Unable to pay his workers, Sichuan labour contractor takes his own life

Prior to the Chinese New Year, hundreds of thousands of construction workers all across China staged demonstrations and protests demanding the payment of wage arrears. Several of these protests ended in highly-publicised tragedies, with the death of workers or relatives who had joined in the protest. One case however never made the headlines, largely because of the determination of the local authorities to cover it up and pin the blame on the victim.

In early 2014, Wang Jianhua, a man with no previous experience in the field, took on a local government project to develop the rural electricity grid in the mountainous Liangshan region of south-eastern Sichuan. The work primarily involved the installation of pylons and overhead lines in the isolated villages of Leibo county. The project was said to be worth 14 million yuan but Wang agreed to subcontract it from Sichuan Electric Power Corp. for just 6.67 million yuan. With that, Wang was supposed to buy all the necessary equipment and materials, as well as pay the workforce of more than one hundred for the duration of the project. However, the payments he received were consistently in arrears and Wang was forced to borrow over a million yuan to cover the costs. Unable to pay his increasingly angry workers, Wang went off one day in late December and drowned himself in a nearby river. 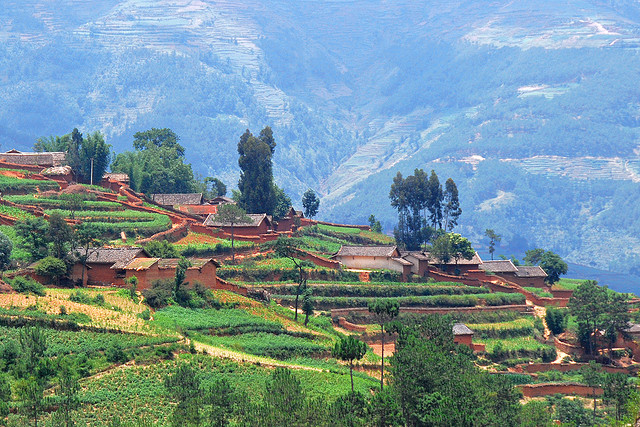 Photograph of Liangshan village by Autan, available at flickr.com under a creative commons licence.

His body was not immediately discovered, and the authorities used his disappearance to pin the blame for the non-payment of wages on him. It was only after his family launched their own search that his body was found two weeks later. In January 2015, Wang’s sister, Wang Xiaohua told China Labour Bulletin Director Han Dongfang about the background to the tragedy and the intense pressure the family was under to cover the incident up.

A project doomed from the start

Wang Jianhua had been the director of a state-owned sugar plant and was a member of his local government advisory body, the People’s Political Consultative Conference, adjacent to Leibo county. Wang had no experience in the field but he got the job through a friend, the director of the electric power bureau in Liangshan Yi Autonomous Prefecture, in which Leibo was situated.

Wang Xiaohua said the normal practice in these situations was for an advance of ten percent to 20 percent to be paid up-front to the contractor, with subsequent payments based on project progress. However, it was not until 15 May, four months after the start of the project, that SEPTTC contributed anything at all, and that initial payment amounted to just 100,000 yuan. Between May and August, Wang did get another 2.7 million yuan but by this time he had already run up debts far in excess of this sum, and had to borrow 1.2 million yuan from friends in order to cover his expenses, including the payment of several hundred thousand yuan owed to his five managers.

By mid-December, the project was 80 percent complete and Wang had received a total of 4.56 million yuan but he still owed more than two million yuan. His sister said:

He owed wages to these workers but he was a very honest, sincere person. Being badgered left and right, being told he had to give people money, and then being told the same thing next day and having to promise countless times but not being able to keep his promises, he just could not face the workers.

With the Chinese New Year fast approaching, Wang simply could not take it anymore. On 23 December, a colleague “pushed open the door and found a pool of blood on the floor” of the room that Wang had been staying in. There was no sign of Wang. It was later assumed that Wang had slit his wrists in the room before walking to the river nearby.

The family posted an online plea for help and people from their home village joined the search. But when they reported his disappearance to the Public Security Bureau, the police claimed that Wang had run away with the money owed to his employees. Despite this serious accusation, the police never actually bothered to launch a criminal investigation or mount a search of their own. The police’s blinkered view was shared by the Leibo county government, and no assistance was offered to the family.

The family spent 300,000 yuan organising the search themselves and after two weeks, Wang’s body was eventually found in the Jinsha River on 7 January 2015.  At the time of his death, Wang was just 43-years-old.

The cover up begins

The family was given 400,000 yuan as a one-off settlement intended to cover funeral costs, as well as benefits for Wang’s dependents and ageing parents. However, this sum barely even covered the cost of the search Wang’s sister had organised. The compensation was allegedly based on SEPTTC’s internal regulations for compensation payments but Wang was not actually an employee of SEPTTC. He had been given a titular position within the company but in reality he had been hired as an independent contractor. As Han Dongfang pointed out, Wang had been forced to take on huge debts and pay his workers out of his own pocket, something no company employee would ever be required to do. Moreover, since Wang was not qualified to undertake the project, Han said, he should not have been hired in the first place. In addition, none of the workers Wang had hired had the employment contracts or the social insurance cover that regular company employees are entitled to by law.

And hanging over all of this was the question of the missing seven million yuan from 14 million yuan contract that Wang never even saw. The most likely explanation was that the money had simply been skimmed off the top and pocketed by various unknown people either in the local government or the power companies, but Wang’s sister was nervous about pushing that issue too hard:

In fact, the local authorities and the two power companies were already putting pressure on the family:

They are trying to buy us off with this benefit payment for regular employees; telling us to take the money and go. If we don’t do that, then this or that might happen, they say. The Public Security, the government, they are all putting pressure on us.

The local authorities forced the family to sign what was effectively a gagging order barring them from using social media platforms to publicise the incident any further. They were warned that they could not use the media to generate negative publicity about the events surrounding Wang’s death, and that legal redress would be pursued if they acted against the interests of the companies concerned. Asked why they signed such an agreement, Wang Xiaohua said:

This matter had dragged on and on. Only now have they given us a settlement proposal. Our family could not deal with the pressure. If we hadn’t signed we would have got nothing. We are just rural labourers, and we have not even got back the money we sunk into this. We have very little legal knowledge. We certainly need help from outside, from the public.

Han stressed that they had the right to tell the truth but Wang countered, “Yes, we have the right. But they have the power.”