Protests by food delivery workers over the exploitative monopolies of companies like Ele.me and Meituan have made headlines recently, but the official trade union, which pledged to recruit more delivery workers into its ranks in 2018, remains inert.

Three years after the All-China Federation of Trade Unions (ACFTU) included food delivery workers as one its eight key sectors for organizing, the majority of drivers are still outside the union ranks and vulnerable to exploitation.

As platform workers, they lack the legal protections given to formal employees meaning their pay and working conditions are subject to algorithms specifically developed to maximise profit with no thought for worker welfare. Companies shirk their responsibilities as employers by hiring workers as third-party contractors, rather than having them sign labour contracts that guarantee workers a minimum set of labour standards.

Moreover, when food delivery worker activist Chen Guojiang attempted to organise his fellow workers to take action against the platforms, he was arrested by the authorities and charged with “picking quarrels and provoking trouble.” 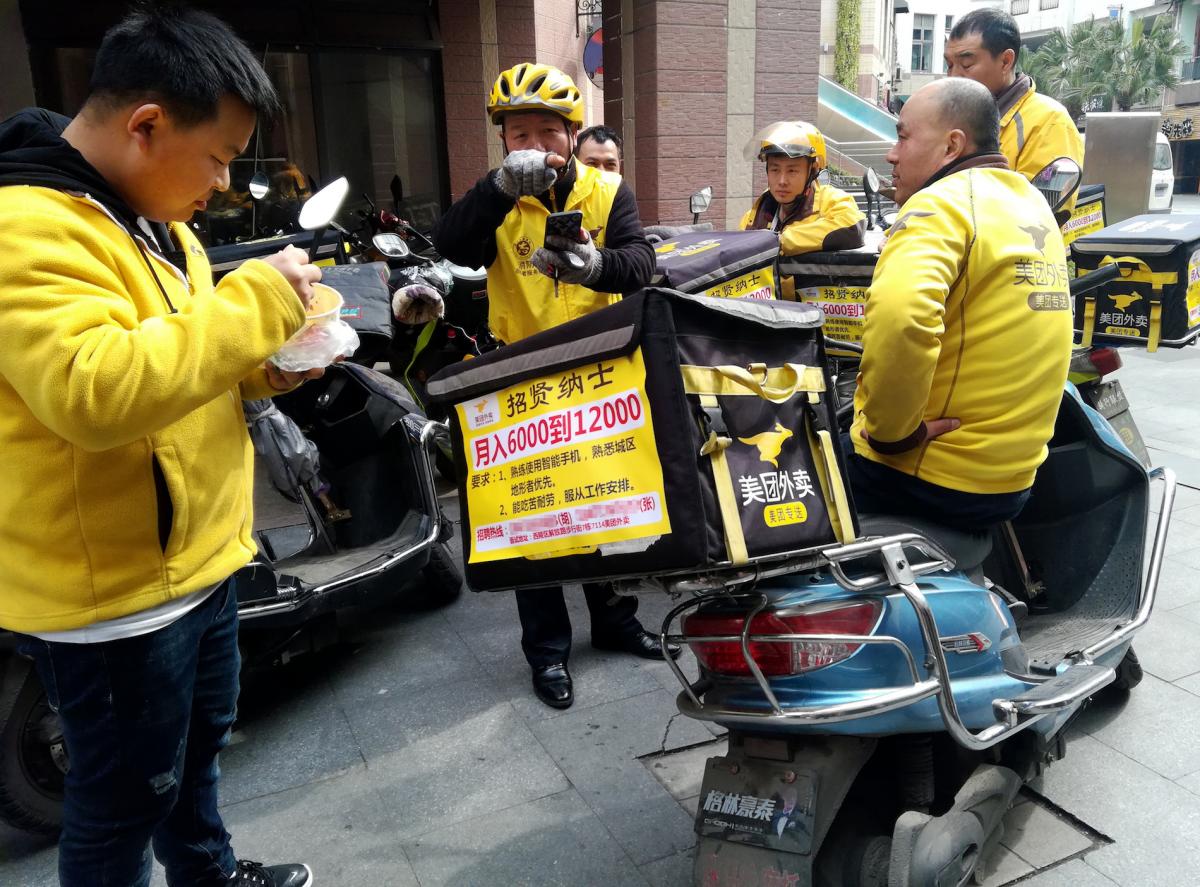 With no amelioration of working conditions in sight, workers routinely sustain serious injuries from accidents and can be owed substantial wage arrears. Two such cases, occurring over the New Year, made headline news in China and internationally and led to intense debate on social media.

When a 43-year-old food delivery worker, surnamed Han, died from exhaustion from overwork in Beijing on 21 December 2020, Ele.me claimed he was not its direct employee and initially offered his family just 2,000 yuan. Before his death, Han bought work accident insurance through Ele.me’s app.

Another food delivery worker, 47-year-old Liu Jin, was owed wages amounting to 5,000 yuan. On 11 January 2021, Liu set himself on fire in front of the Ele.me franchise in Taizhou, Jiangsu, incurring severe injuries. Despite working over 12 hours a day for Ele.me, Liu was still classified as a contractor.

China Labour Bulletin staff followed up with local trade unions to gauge their response to these two tragedies and assess their efforts to organise delivery workers.

Neither Han nor Liu had asked for help from the local trade unions, but neither did these unions offer any concrete help or comfort to their family members. The Sunhe township trade union in Beijing’s Chaoyang district, where Han picked up his orders for the last time, said that they had not heard about his death. The union head, surnamed Zhao, doubted the veracity of the incident, despite it making headlines. He believed that since Ele.me was a huge company, it was unlikely to behave badly.

“The more detailed the report, the more likely it is to be fake,” said Zhao. He then attempted to shirk responsibility by questioning whether it was his district that was responsible for handling the case. “First, we need to figure out which district this case belongs to. From the union’s point of view, this incident was either fake news or does not fall within this union’s remit.”

Regarding Liu’s self-immolation, CLB spoke to an officer from the Rights Protection department of the Taizhou municipal trade union. The officer claimed not to know anything about the case and listed another contact number, which no one answered. CLB then contacted the Hailing district trade union in Taizhou. The officer surnamed Shen knew about this incident, but laid the blame on Liu. The union expected Liu to take the initiative to contact the union rather than reaching out themselves. The officer added that the case was now handled by the district government’s Cyberspace department.

Local unions often pat themselves on the back for recruitment efforts, but when workers are truly in need, they distance themselves. The Hailing district trade union, for example, was credited in the Workers' Daily for recruiting 948 workers from the eight key sectors during October and November of 2020. The Sunhe township trade union also claimed that they had recruited members in shopping malls where they thought delivery workers would gather. Yet they take no responsibility for non-members like Liu or Han.

Local trade unions continue to expect businesses to take the initiative on their workers joining trade unions, rather than reaching out to workers directly. Shen from the Hailing district trade union reiterated this belief in her conversation with CLB, saying that company consent was required. Yet the size of these giant monopolies does not cohere with the hierarchical and bureaucratic structure of government, with unions organized down to the district, township, or even sub-district level.

Zhao from the Sunhe township union admitted that “Ele.me is a very big platform, and it can’t be governed by the township union; it should be governed either by the Beijing municipal union directly or by the Chaoyang district union… Also, there is no Ele.me enterprise registered in Sunhe, so its union administration seems not even to be in Beijing.”

The sectoral trade union in Chaoyang district claims that it has covered 100 percent of workers since 2017. However, this number only refers to companies that have consented to set up unions.

CLB suggested to both unions that instead of waiting for enterprise consent, they could encourage individuals to join sectoral unions. Union officer Shen said that reform had to happen “from top to bottom, from national level downwards,” and added that “reform needed written approval from the top.” Her answer betrays the union tendency towards passive pen-pushing, rather than taking direct action.

While the officers that CLB spoke to agreed to pass on our suggestions to their bosses, they were reluctant to change their day-to-day work. “We are at the bottom,” said Shen, referring to the union hierarchy. Only when she and others like her have orders from above would they attempt to change things.

Trade unions remain focused on empty reporting of their recruiting achievements rather than truly addressing the needs of workers. CLB’s conversations with officials reveal a reluctance to work outside of bureaucratic structures, even as the system is clearly unaligned with the nature of gig work.

For more details on these cases (including links to relevant Chinese media articles), please refer to our original Chinese article, 外卖员猝死、自焚，八大群体入会如何落到实处? in the trade union reform and accountability section of our website.