One year ago, at five o’clock on the morning of 22 December 2017, a black Nissan ploughed into group of sanitation workers who were cleaning an overpass in the north-eastern city of Harbin. Five workers were killed and another two were badly injured. The road was icy and the driver reportedly had a blood alcohol level twice the legal limit.

This tragic incident was widely reported at the time and raised awareness of the dangers faced by workers on the streets of China. But it was far from exceptional, and one year on, very little appears to have changed for China’s sanitation workers, food delivery workers, express couriers and others who risk injury and death every day they go to work.

Of the 507 incidents recorded on CLB’s Work Accident Map so far this year, 148 (29 percent) were caused by a collision with a motor vehicle. Of these incidents, 70 involved sanitation workers and 69 involved delivery drivers. 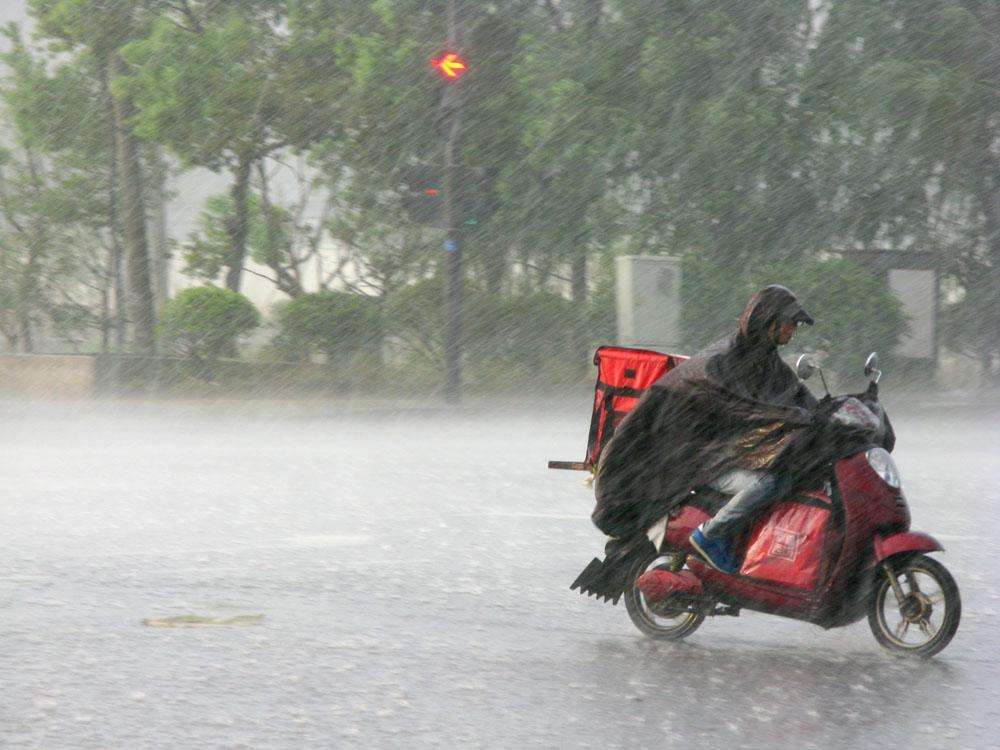 Delivering food during a rain storm.

It is important to note that these 148 incidents exclude those related to the transport of hazardous materials, which are less frequent but often result in considerable death tolls. For example, an explosion and fire in a truck waiting outside a chemical plant in Hebei on 28 November killed 22 people, injured another 22, and destroyed 50 vehicles parked in the vicinity. In another incident in Shaanxi on 10 April, seven people were killed and 13 injured when a truck carrying hazardous materials exploded.

In most cases, accidents involving motor vehicles affect just one or two workers but they are so common that the culminative total of deaths and injuries is substantial, particularly in major cities where delivery drivers and sanitation workers are most commonly employed. In Shanghai, for example, a total of 76 food delivery workers were either killed or badly injured in the first half of 2017 alone. In just two days this month (13/14 December) four food delivery workers in the smaller cities Binzhou, Nanping, Taizhou and Liyang were all badly injured in separate traffic accidents.

There is no doubt that China’s roads are a hazardous working environment. The World Health Organization estimates that about 260,000 people are killed in road accidents in China every year (712 people every day), and the majority of fatalities are vulnerable road users such as pedestrians, cyclists, and motorcyclists. But it is not just the high volume of road traffic that is the problem; the terms and conditions of employment for both sanitation workers and food delivery workers makes them even more vulnerable to illness, injury and death.

Sanitation workers are usually employed to clean city streets during the night or early in the morning when they will not cause a disruption to traffic. However, there is still traffic at these times and drivers are often tired after working long shifts or drunk after spending the night partying. Moreover, with generally empty streets, these drivers will let their guard down further and be even less likely to notice a group of sanitation workers on the road. To make matters worse, some contractors fail to provide workers with high-visibility jackets or ensure that workers are stationed on the perimeter to alert drivers to the worksite ahead.

Another important factor in sanitation worker injuries is the age of the employees. The basic wage for sanitation workers is very low, and working hours are long and arduous. Very often, the only people willing to take these jobs are poorly educated elderly workers who cannot find employment elsewhere. Very often these workers do not have adequate pensions and have to keep working well past the statutory retirement age just to survive. Moreover, elderly workers are much more vulnerable to serious injuries and have to take additional time off work after an accident or illness in order to recover.

Many sanitation workers do not have adequate insurance and are consequently burdened with substantial medical bills after an accident, all of which adds to the loss of income from being unable to work. Employers often seek to evade responsibility for paying compensation, sometimes claiming that because workers are over the retirement age, they do not have a formal employment relationship with the company, or sometimes that an accident occurred outside scheduled working hours so it should not be classified as a work-related accident. In reality, it is virtually impossible for workers to complete all their assigned tasks within the time allocated by their employer and so they have no choice but to work beyond their designated time.

Unlike sanitation workers, the majority of food delivery workers are under 30 years-old, many are just teenagers, with little experience in riding motorcycles, e-bikes or scooters. They are also usually less risk-adverse than older drivers. Many riders are not properly licensed or fail to obey traffic rules, making them ineligible for compensation if they are involved in an accident. There are of course some express delivery and food delivery workers who are middle-aged or elderly, many of who were laid off from state-owned enterprises, and they face the same risks as elderly sanitation workers in terms of injury and lack of insurance.

Food delivery workers and couriers are under tremendous pressure to delivery more items in shorter period of time, and often for less reward. As such, many riders say that in order to make all their deliveries on time, they now have no option but to ignore traffic regulations and this substantially increases their risk of injury.

China’s State Council and Ministry of Transport have called on transport and logistics companies to assume greater responsibility for road safety through better driver training and heightened vehicle maintenance. However, this call will likely fall on death ears because the entire business model of the internet companies that dominate the food delivery market, and logistics industry as a whole, is based on devolving all responsibility for safety on to its so-called individual contractors.

Food delivery workers, couriers and truck drivers routinely take strike action and stage protests to highlight the low pay and exploitative nature of delivery and logistics companies but so far to no avail.

Even though the number or traffic and workplace accidents are decreasing, according to official statistics, clearly much more needs to be done to protect workers on China’s roads. For example: