The families of the 104 firefighters who died in the Tianjin warehouse explosions of 12 August will each receive 2.3 million yuan in compensation from the government.

The families of the other workers who died in the Tianjin disaster will have to go through the work-related injury claims process and will probably end up with less than a million yuan.

The official explanation for this huge discrepancy is that the firefighters have been designated as “martyrs” (烈士) and are therefore deserving of special treatment. But given that the Tianjin disaster was a national tragedy that highlighted the widespread failures in China’s workplace safety system, why not designate all the victims of the explosions as martyrs?

The truth is, sadly, that the compensation the families of workers killed on the job get depends entirely on what the government or their employer is prepared to give them.  In high-profile cases like Tianjin, and the warehouse fire in Harbin that killed five firefighters in January this year, a lot of media attention was focused on the young, poorly trained and poorly paid firefighters who died. As a result, the government was prepared to make a big pay-out in order to stifle any suggestion that it was dishonouring the firefighters’ sacrifice. The other victims of the explosions were relatively anonymous and so the government was under less pressure to compensate them. 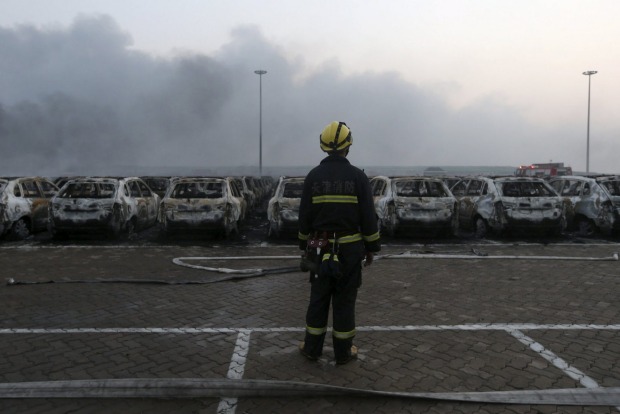 A firefighter at the scene of the Tianjin warehouse explosion. Photo: China Daily.

At the other end of the scale, if a coal miner dies in an explosion at a small mine in rural Yunnan, the death will most likely never get reported. The mine owner might disavow all knowledge of the incident or claim the victim was never even employed at the mine. Alternatively, the miner owner, in collusion with the local authorities, might make a one-time offer to the victim’s family in order to cover the incident up.

There is no real negotiation in compensation deals: the victims are usually presented with a “take it or leave it” offer that comes with strings attached; namely absolving the authorities or the employer of any future liability. China Labour Bulletin’s 2008 research report Bone and Blood: The price of coal in China cites numerous examples of how local and regional government officials put pressure on the families of coal miners killed in major accidents in the 2000s to accept the deal on the table or risk losing a substantial amount of money every day they did not sign.

For example, the widow of one victim in the 2005 Dongfeng Coal Mine disaster in Heilongjiang, in which 171 miners died, told CLB’s Executive Director Han Dongfang how the local authorities got the bereaved families to accept their 200,000 yuan compensation offer:

Han: Did you sign any compensation agreement?
Widow: Yes, we signed it.
Han. What did the agreement say?
Widow: I don't know what the agreement said. Anyway, it is government policy. It said 200,000 yuan, and that we should get an extra 10,000 yuan.
Han: Why did you get an additional 10,000 yuan?
Widow: Because they want you to sign quickly. If they try to talk you around, and you don’t sign, they knock off 3,000 yuan. Then they try again, and if you refuse to sign again, they knock off another 3,000 yuan. If you sign the first time they talk to you, they give you 10,000 yuan. It certainly gave us food for thought — if you sign quickly, you are 10,000 yuan better off. 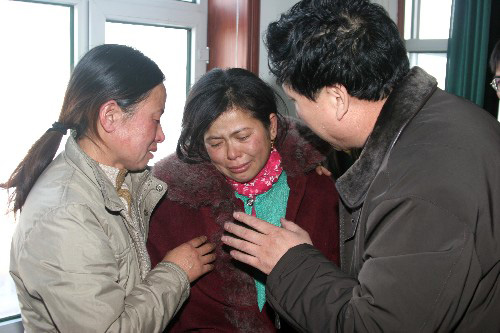 Bereaved family members after the 2005 Dongfeng Coal Mine disaster

The widow of another victim at Dongfeng also felt she had to cremate her husband’s body as soon as possible in order to get the extra 10,000 yuan, even though she was extremely reluctant to do so:

Widow: They told me that if they could find and recover my husband’s body, and I agreed to cremate him, they would give me 210,000 yuan.
Han: So that extra 10,000 yuan was a way of persuading you to cremate him as soon as possible? Did you get the full 210,000 yuan?
Widow: Yes, I did.
Han: After the body was brought to the surface, did you agree to cremation immediately?
Widow: Yes. I had no option but to agree! He was my husband! Do you imagine I wanted to get rid of the body as fast as possible? I’d have preferred to wait a few days. But if we had delayed it by a day, it would have cost us a day’s payment.

Very similar tactics were used by the local authorities in Tianjin to get residents near the blast site to accept a compensation deal of 1.3 times the average house price for their damaged property. The local government reported that, one month after the explosions, about 90 percent of the home owners had signed the agreement but some residents said they were pressured into signing.

“A lot of them signed the agreements after being pressured by their supervisors at state-owned enterprises,” one owner told the South China Morning Post, “They were threatened with their jobs.”

Another resident described on social media how his family came to sign the agreement:

After a month of silence, during the big military parade, the leaders from some bureau came to the hospital to talk. After an hour of “chatting,” my parents signed.

It is important to note that the Tianjin residents were middle-class families with considerable resources, access to good legal advice and social media etc. but even they had to eventually accept what the government was offering with no questions asked.

For workers with no resources and no political influence, the chances of getting a decent compensation award are minimal. As CLB has chronicled in a series of research reports on China’s most prevalent occupational disease, pneumoconiosis, just about the only way poorly paid rural migrant workers  can get any compensation is by organizing collectively and putting pressure on the authorities to officially recognize their occupational disease. But even this is no guarantee of decent compensation.

In one of the best-known cases of collective action, in 2009, a group of 180 former construction workers from Leiyang in Hunan staged a series of protests in Shenzhen to demand compensation for the pneumoconiosis they contracted while working on the city’s construction sites in the 1990s. They were successful but, in just three years, much of the compensation had been spent on medical expenses and the repayment of existing debts. Many of the Leiyang workers died penniless.

In CLB’s final research report on pneumoconiosis, published in 2013, we called on the Chinese government to fully compensate the estimated six million workers with pneumoconiosis by covering their medical costs and basic living expenses. This would come to about 120 billion yuan a year.  If the families of every one of the more than 60,000 workers who die in industrial accidents every year in China  were compensated one million yuan, that would add up to at least 60 billion yuan a year. And if the millions of workers who are injured every year in work accidents were properly compensated, according to China’s laws and regulations, the total annual bill could be around half a trillion yuan.

If the government had to pay out half a trillion yuan every year, it might begin to take work safety seriously. At present, however, there is a vicious cycle in which the government and employers routinely ignore their responsibility to compensate the victims of work accidents and as a result they are under no financial pressure to reduce the number of accidents by investing in work safety.

The huge cost of the Tianjin warehouse disaster might begin to make the authorities think differently but China’s workers cannot afford to wait for the government to get the message. Workers need to organize and demand a safe workplace, proper training and protective clothing and equipment. At present, the main concerns of workers are low wages and benefits but eventually demands for safe working environment will come to the fore, just as they eventually did in Europe and the United States.

Once workers are organized, and workplace trade unions ensure that all employees enjoy a safe working environment, the compensation lottery will fade away and eventually be replaced by a system in which every injured worker gets, at the very least, what they are legally entitled to.