Following widespread public outrage at the handling of a protest by teachers on Sunday 27 May, the municipal government of Lu’an, in the central province of Anhui, issued a rare public apology on Tuesday 29 May for the “simple and rude behaviour of a minority of police officers.”

The teachers who were demanding payment of a performance bonus and the same income as civil servants, as mandated by the 1994 Teachers Law, were allegedly beaten and man-handled by the police. Social media reports claimed more than 200 teachers were involved, the police said just 40 teachers took part. 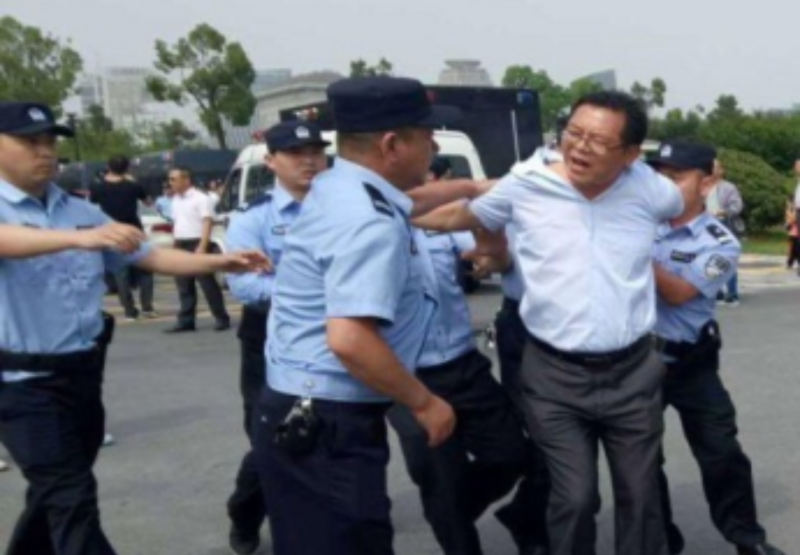 Screen shot from now deleted video of the protest

The local government’s statement however denied that the teachers had a genuine grievance. It claimed that after looking into the matter there had been “no one-off performance bonus” paid to civil servants so therefore the teachers’ claim that they had been unfairly treated was not legitimate. The Lu’an government claimed that all teachers in its jurisdiction had been fully remunerated according to national and provincial laws and that “there is no wage arrears problem” for elementary and secondary school teachers.

This apology/explanation came after a police statement initially denying they had mishandled the protest. The police denial was ironically the single strongest confirmation that the incident actually took place as numerous social media posts and videos of the conflict were quickly deleted by internet censors.

The lack of proper implementation at the local level of national education policies, especially those contained in the Teachers Law, has been a long standing cause of dissatisfaction among teachers; not just in Anhui but in nearly all less developed provinces that under-invest in education. And China’s official media took the opportunity to highlight the issue.

State television network CCTV issued a commentary on 28 May lamenting that teachers had not been able to find a solution to their grievances from within “systemic channels.” It remarked that wage arrears had been a recurrent issue for teachers in recent years, adding that police intervention in these “exceptional confrontations” is inevitable, but the dissolution of social conflict through police intervention is only a stop gap, not a real solution. “Furthermore, it may actually intensify the conflict.”

The traditional “intellectuals’ newspaper,” the Guangming Daily went a step further calling the non-payment of teachers’ salaries and benefits “unconstitutional, in breach of the Teachers Law and Civil Law.” The newspaper estimated that teachers’ salaries in a small town like Lu’an were certainly not enough to help them attain a “middle class” lifestyle, even if all their salaries and benefits had been paid.

The People’s Daily issued a blunt commentary questioning the competence of local bureaucracies in Anhui:

If the teachers’ claims of being owed more than one year’s performance bonuses is true, is this due to local economic development lagging behind, local finances finding it hard to cope with paying teachers, or have funds been appropriated for other uses?”

Quoting January’s Opinion on Deepening Education Systemic and Structural Reform, the People’s Daily called for the thorough implementation of President Xi Jinping’s policy of improving teachers’ livelihoods, so “the revival of education can be an integral part of local development.” No matter how poor local finances are, funding for education cannot be jeopardised, and “teachers cannot be pushed aside,” it added.

The Opinion quoted echoed provisions in the Teachers’ Law, that elementary and secondary school teachers’ average income shall not be lower or higher than that of local government service staff and that teachers’ incomes should be incrementally improved, particularly in rural areas.

The Lu’an protest was in fact the second time in the last year that teachers in Anhui had taken a stand against discriminatory policies. In November 2017, around 80 secondary school teachers from Chaohu, a city just 50 kilometres east of Lu’an, protested the non-payment of the performance bonuses that civil servants had received. Then Chaohu Mayor Zhang Sheng stated publicly that a valuable lesson had been learnt and that the issue would be resolved.

A leaked document issued by the Anhui provincial education bureau dated 16 November 2017 confirms that teachers in both Chaohu and Lu’an had not received the bonuses they were entitled to, contradicting Lu’an government’s claims in its statement this week.

The document revealed that, of the 13 municipalities in Anhui that had issued performance bonuses, seven had paid both teachers (primary and secondary school) and civil servants but only five of them had paid both groups the same amount of money. The other six municipal governments did not pay teachers at all.

One commenter on social media wondered if the protest, and the eventual police intervention, could have been avoided if there had been a properly functioning teachers’ union to lead collective bargaining and solve latent conflicts before they turned sour, only to be criticized by other users for being too idealistic and lacking a grasp on the nature and track record of China’s official trade union, the All-China Federation of Trade Unions (ACFTU).

People pointed out that the trade union was too passive and there were no effective channels of communication with the authorities. “One year went by and the union just sat on their hands,” noted one netizen, “the teachers only staged a protest because they couldn’t keep quiet any longer.”

There has been noticeable surge in teacher protests across China recently. Of the 135 incidents recorded on CLB’s Strike Map in April, a total of 14 were led by teachers. And the protests continued into May: around 2,000 retired community teachers in Inner Mongolia also took to the streets at just about the same time as the Lu’an teachers. Teachers may make up only two percent of the workforce in China, but they have consistently accounted for around four percent of total protests and strikes. See CLB’s 2016 report Over-worked and under-paid: The long-running battle of China’s teachers for decent work, for more details