Two thirds of all civil law suits concluded in China last year were either resolved through mediation or withdrawn, the president of the Supreme People’s Court Wang Shengjun said in his work report to the National People’s Congress on 11 March 2012.

China’s courts concluded 489 million civil cases (excluding appeals) in 2011, a ten percent increase over 2010, the report said. Of these cases, 314 million were related to disputes over marriage and family, compensation for injury, land, property, and the rights of employees and consumers.

Wang stressed that resolving disputes through mediation was now a priority of the Chinese court system and that 67.3 percent of civil cases were either handled by mediation or withdrawn. Legal experts pointed out that China’s civil courts often persuade plaintiffs to withdraw their cases at the end of the year so that they can meet their 99 percent clearance rate. The cases are then reopened in the New Year. However the vast majority of the 67.3 percent of cases would still be mediated.

In labour dispute cases, mediation has the advantage for worker plaintiffs of being a relatively quick and straightforward process that does not involve long-drawn-out and costly court battles. The disadvantage is that plaintiffs rarely if ever get the compensation awards they would have been entitled to if the courts had followed legal procedure to the letter. 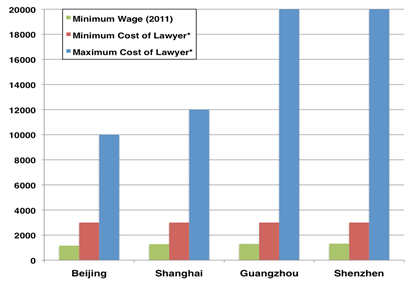 For more on this issue see: Why should workers have to pay their own legal fees even when they win their lawsuit? The argument for shifting legal fees in labour dispute cases on to the employer.