Construction workers, teachers and miners joined factory workers in a wave of strikes and protests across China in the final quarter of 2014. China Labour Bulletin’s Strike Map recorded 569 incidents during the fourth quarter, more than three times the number in the same period in 2013.

The dramatic upturn can be partially explained by the increased use of cheap smartphones and social media as tools by workers to get news of their protest action to a wider audience but at the same time there clearly is an increase in labour activism in response primarily to the economic slowdown in China over the last year or so. 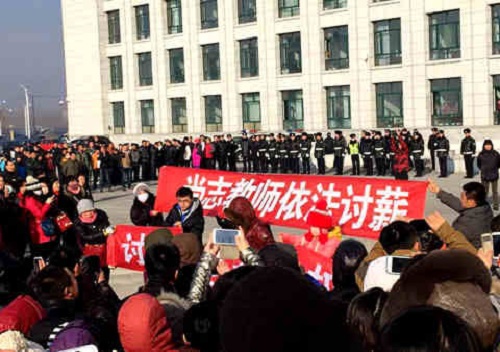 The southern province of Guangdong continued to be the epicentre of worker activism in China, accounting for about 20 percent of all incidents, however there has been a sharp increase in the number of protests in several other provinces, with the number of incidents in Jiangsu, Shandong, and Henan jumping from 11, 6, and 6 respectively in the fourth quarter of 2013 to 43, 34, and 30 last year.

The worker unrest already evident in the construction industry in the third quarter of 2014 intensified in the last three months as workers sought to ensure payment of long-overdue wages in arrears prior to the Chinese Lunar New Year holiday. The construction industry accounted for 31 percent of all incidents in the fourth quarter, second only to the manufacturing sector, which still tops the list at 36 percent.

There were 60 strikes in the transport sector, or just over ten percent of the total, down from 22 percent in the same quarter of 2013. The drop in fuel prices last year helped alleviate at least one of the daily pressures faced by taxi and truck drivers in China, although the age-old problems of high fees and competition from unlicensed drivers remain a source of tension.

One of the most notable features of the strike action seen in the last quarter was the 43 strikes and protests by teachers, more than four times the number in the fourth quarter of 2013. After massive strikes by thousands of teachers in the north-eastern province of Heilongjiang in November in protest at low wages and a new pension scheme, more and more teachers in Henan, Jiangxi, Sichuan, and Anhui staged protests over wage arrears, performance-related pay schemes and forced overtime.

There was also an increase in the number of strikes and protests by miners, predominately related to wage arrears and job lay-offs as the industry continues to contract.

Across all industries, workers’ demands for wage arrears, pay increases, and compensation dominated the disputes in the fourth quarter, accounting for more than 87 percent of the incidents recorded.

There is little reliable data on the number of disputes that were successfully resolved but anecdotally there is evidence that factory workers in Guangdong at least are becoming more adept at bringing their employer to the bargaining table and hammering out an agreement on wages, social insurance, benefits etc.

In one of the most recent cases, more than 2,500 workers at the Lide Shoe factory in Guangzhou took strategically-timed strike action in December that succeeded in bringing management to the negotiating table and led to an agreement on the payment of social insurance and housing fund contributions, overtime and annual leave payments as well as high-temperature subsidies.